Italy in the High Tatras

The spa village of Tatranská Polianka was known by several names in the past. The predominant name was Weszterheim, or Weszter’s House, after a businessman of that name who bought it in 1881 as part of the plots of the Mariássy family under the peak Slavkovský štít. 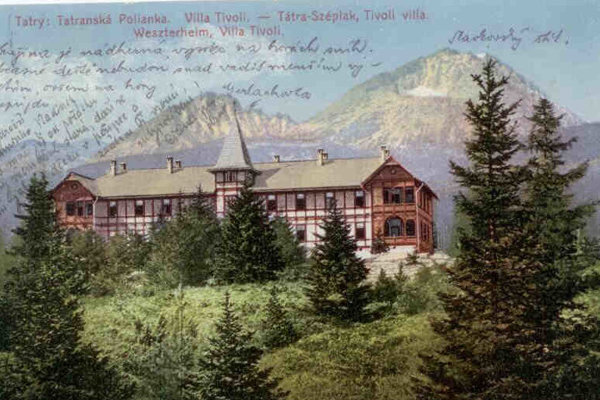 Hungarians used to call it Széplak, or Tátra Széplak, meaning something like A Nice Home. Germans, on the other hand, only called it Schönau, i.e. Nice Meadow. So many positive meanings have been concentrated in the name of this Tatra settlement that it is worth asking what lies behind. One explanation has it that Polianka was erected in a beautiful place; another one says that its design, surrounded by manicured parks, was very pedantic and decorative.

Postcards from the beginning of the 20th century indeed show perfectly neat areas in front of sanatoriums and hostels, clean paths and pedantically mown lawns. It is interesting that in this postcard from 1922, this extremely perfect layout is absent. It seems that ostentatious order and elegance were connected more with the Austro-Hungarian Empire, and that these attributes gradually got lost with the arrival of democracy.

The picturesque chalet with the Italian name Tivoli, built in 1902, belonged among big hostels; visitors could be accommodated in 45 rooms.

In 1923, the famous Czech poet Jiří Wolker was cured of lung tuberculosis (of which he then again contracted and died from at age 24). After the onset of communism and nationalisation in 1948, the chalet received a new name, Orava, which is still its current name.