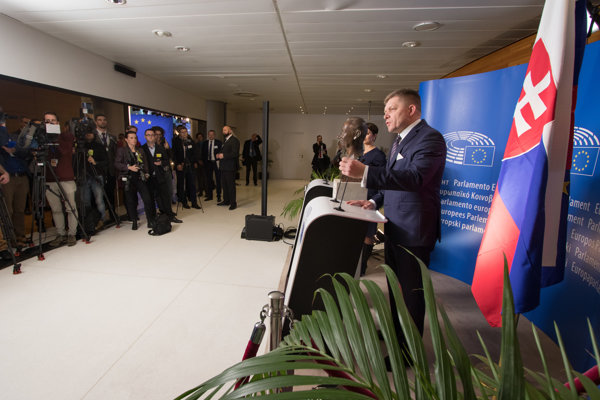 Slovak Prime Minister Robert Fico has evaluated the country’s first-ever presidency of the EU Council in front of MEPs in a politically correct speech and he even indirectly supported sanctions against Russia.

At the later press conference with Slovak journalists however, he immediately denied it and repeated his claims about dirty tricks, the Denník N daily reported.

Fico talked about Slovakia’s presidency in front of the nearly empty hall of the European Parliament, without using any vulgarisms about journalists or populist attacks on migrants. He described the EU as the best project which however has lost the trust of the people, which he said should change. He also criticised populist referendums, like Brexit or the recent plebiscite in Italy.

“I want to call on leaders to stop solving their national agendas by attacks at the expense of all of us here in Europe,” Fico said, as quoted by Denník N.

The speech has surprised several MEPs, including Slovak Jana Žitňanská and Briton Charles Tannock, who has a Slovak wife and closely monitors the situation in the country. They both had the feeling of seeing a different Fico than the one who makes speeches in Slovakia, the daily reported.

The Slovak PM asked in his speech whether the EU will follow the US if it decides to abolish sanctions against Russia.

“This will show whether we are or aren’t sovereign in our opinions,” Fico said, as quoted by Denník N, adding that there will also be a problem if the US administration lowers its presence and engagement in Europe.

Tannock and several MEPs understood it as Fico’s support for sanctions against Russia. The PM has however explained to journalists that his attitude has not changed, Denník N wrote.

He also repeated at the press conference that most of the MEPs consider Slovakia’s presidency successful.

He did however, also say that several journalists have used dirty tricks against Foreign Affairs Minister Lajčák and created some kind of bubble around him, as reported by Denník N.

The President of the European Commission Jean-Claude Juncker said that Slovakia’s presidency had achieved the most that it could. He ended his speech, which followed the one by Fico, by saying that he would send the whole text to the non-present MEPs.

Fico pointed out at the beginning of his speech that he does not consider their presence necessary. Slovak MEP Ivan Štefanec later commented for Denník N that he cannot be surprised that many did not want to come after Fico’s verbal attacks on the EP.