This Christmas card dates, with all probability, to the 1930s. Although the writing it contains is in Slovak, the architecture of the village buildings shows that the artist who made this painting was probably Czech. 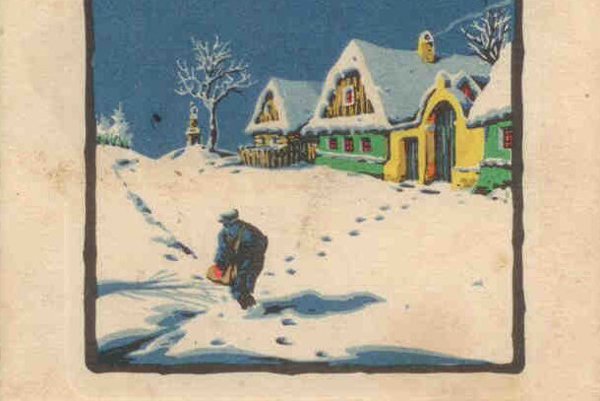 All of Europe used to celebrate this feast, even though its course differed slightly in individual countries. Social habits and rituals were different in central Europe than in the west, especially during the days of Christmas. While in western Europe, visits, mutual giving of presents and feasting concentrated on December 25, in central Europe this day was rather solemn and usually celebrated only with closer family.

On the day of Jesus’ Birth, Christmas Day, it was even not considered appropriate to go outside the home, save for going to the church. In Slovakia and the surrounding area, the next day (26th) was deemed as the day meant for visiting.

The central day of the whole Christmas season was Christmas Eve. In the past, it was considered fatal, in a sense, as crucial events of the following year were usually foretold with various superstitious rituals.

The family tried to predict the state of health of the family or if there would be a wedding or death, even the extent of harvest or the amount of eggs.

Today, many of these habits have gone extinct irretrievably, taking with them also a bit of Christmas magic.