Open skating rinks are in Old Town; it is also possible to skate in ice stadiums. 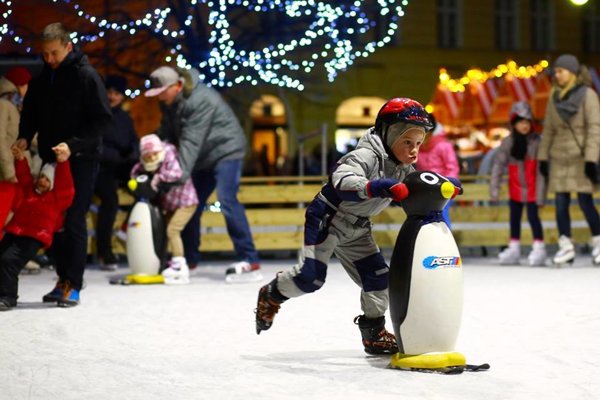 Everyone is familiar with romantic ice skating scenes in New York in American films. But photos of prominent Slovak photographer Karol Kállay of historic Bratislava show that Bratislavans also liked to skate under the open sky. Similarly to recent years, citizens and visitors of Bratislava can once again find plenty of opportunities for enjoying winter skating in the Slovak capital, some for a fee, and others free.

There are two possibilities for free skating in the Old Town. One rink, operated by the city council, is located in front of the Primate’s Palace on Primaciálne Square. The second one is on Hviezdoslavovo Square operated by Old Town. Both are open daily from 10:00 until 22:00. While skating is free, there is also a possibility to rent a pair of skates for €4 for 1.5 hours. While the operation of these skating rinks is planned until the end of Christmas and Epiphany festivities, the city council as well as Old Town can imagine its extension, weather permitting. 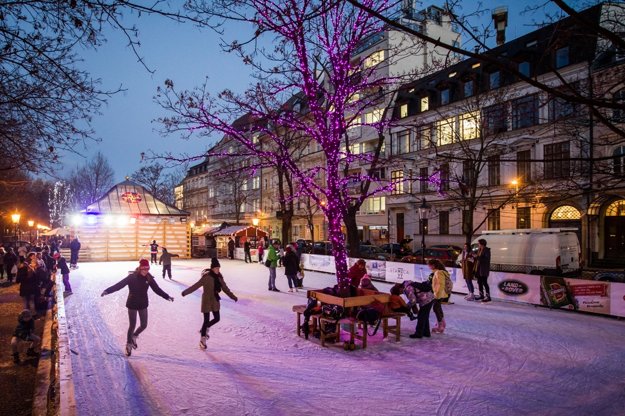 This winter season citizens and visitors of Bratislava can also enjoy skating in the River Park development on the Danube embankment. Entry is free and the rink is open daily from 10:00 until 21:00. Visitors can also rent skates or even a helmet. Operation of the rink will also depend on the weather.

Another skating rink is located next to the northern entrance of the Bory Mall shopping centre. Those interested can skate, again free of charge, from 10:00 until 21:00 during work days, and from 9:00 until 21:00 during weekends. For now its operation is planned to last until February 12, but again weather permitting.

Contrary to the previous year, Euroeva has not opened a skating rink this year.

Skating in boroughs and on lakes

Some of Bratislava’s boroughs traditionally operate ice skating rinks for the public. For example, Vajnory has already launched a skating rink 40x20 metres in the sport centre Alviano. It is open from 12:30 until 17:20 during work days and from 11:30 until 17:20 during weekends. Those interested should go to the website of the borough, www.vajnory.sk, for opening hours for the upcoming festive days. Skating is free for Vajnorans from Monday to Thursday. During other days all skaters pay €1.5 (adults) or €1 (students up to 18 years). Teams can also book the whole rink to play a match.

People can skate, at their own risk, also on lakes, of course if freezing temperature persist. Such places are under the Devín castle, the Kuchajda lake in Nové Mesto, lakes of Štrkovec and Rohlík in Ružinov or the ponds at Železná Studienka recreational area.

Some boroughs solve lack of places for skating with renting ice stadiums. For example, Nové Mesto borough has opted for such a solution. Thus, all Bratislavans can skate free of charge at the Ondrej Nepela Stadium on January 14 and 28 (carnival on the ice), February 11 and March 11, always from 10:00 until 12:00.