Blog: Middle class in Slovakia has higher burden than in Austria

Changes in corporate taxes and social security contributions from January 1, 2017.

Admittedly, the government has kept its promise and has decreased the corporate income tax rate from 22 percent to 21 percent. However, that is the only positive measure and if compared to the decrease to 9 percent in Hungary, it makes you rather smile.

Moreover, several unpleasant and unsystematic surprises are awaiting us at the beginning of the next year: Not only is the taxation of dividends being reintroduced after 12 years, but also the social security burden increases unexpectedly at the last minute. Below you can find an overview with a comparison to two neighbouring countries (also in graphical form) and a few useful tips. 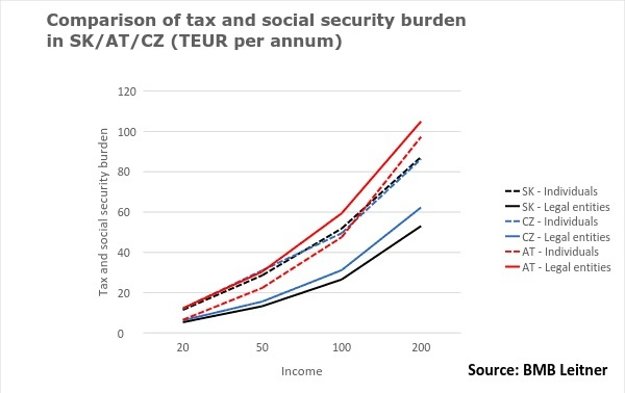 When distributing dividends in the future, we have to be careful. Depending on which fiscal years the profits will be distributed for, the dividends will or will not be subject to taxation and/or health insurance contributions. Besides, the more complex form of taxation and tax rates will have to be considered, too.

The taxation of the so called “new dividends” (profits reported after January 1, 2017) will be applicable primarily to individuals and the tax rate will amount to 7 percent. Generally, the taxation of these dividends will not affect legal entities, unless they are residents of “non-contracting states”. Dividends flowing from and to non-contracting states will be subject to the tax rate of 35 percent, applicable to both individuals and legal entities. In accordance with international standards, the recipient should be considered in line with the beneficiary owner concept.

From January, social insurance contributions will rise significantly for sole proprietors, self-employed persons, but also for employees and their employers, as the maximum assessment base will increase from 5 times to 7 times the average monthly wages from two years ago (from the current €4,290 to €6,181). Moreover, for the purposes of health insurance, the maximum assessment base will be abolished altogether, i.e. health insurance contributions will be levied in the same way as income tax.

Even though small businesses – sole proprietors – can benefit from the rise in the upper threshold for lump-sum expenses from 40 to 60 percent, the maximum deductible amount is limited to €20,000.

For more details see also Mailing BMB Leitner: the October issue for dividends and the November issue for social security.

What does it mean in practice?

Employees and employers have not been forgotten. This change will be more painful for them than for all the others. E.g. if a company employs 15 managers whose income exceeds €100,000, the payments to insurance providers will rise altogether by more than €220,000 and the employer’s costs will increase by round €160,000.

The state does not hold a protective hand over a typical employees either: An employee receiving a gross monthly salary of €1,000 has to pay €239 in taxes and social security contributions from January 1, 2017 in Slovakia. In Austria he would only pay €151. Thus the Slovak state with its considerably worse services is by more than a half costlier.

Due to frequent legislative changes, the trend of imposing a low tax burden on individuals has changed significantly in Slovakia in recent years. Even though the personal income tax rate is still reasonable (25 percent for income exceeding €35,000), the total tax and social security burden for the income category over €50,000/year changed dramatically after the amendments were adopted.

High labour costs triggered by high social security expenses on the part of employers force the employees out of the labour market and are unfavourable also for sole proprietors and self-employed persons, who will be tempted to change their form of business from January (see also the graph above).

However, even more striking is the fact that in Slovakia, the tax and social security burden of individuals within the income category of €20,000 through €100,000 is higher than across the border in Austria. This difference disappears with rising income (ca. €200,000) in Austria, but compared to the Czech Republic, our sole proprietors and other self-employed persons are subject to a considerably higher burden.

The taxation of legal entities (corporate income tax and the subsequent taxation of dividends) is still acceptable, while the conditions for legal entities in Slovakia are significantly better than in Austria and the Czech Republic.

The comparison of tax and social security burden with the neighbouring countries is displayed above in graphical form.

In the light of this analysis we assume that in Slovakia, it pays off to do business through an incorporated legal entity. Given the tax and social security burden as well as the unlimited liability exposure, it is not favourable to act as a sole proprietor in Slovakia, except for a few exceptions (small businesses with low actual costs).

Owners of companies who have received their income through employment contracts so far could consider the combination of employment and dividend income.

With respect to project managers or specialized managers (e.g. IT) we recommend switching from employment to service contracts or license agreements. Of course, only if such a switch is in accordance with the corporate culture and personal preferences. In this respect the case law is quite generous and puts emphasis on the freedom of contract also for tax purposes.

Please note that in each individual case it is essential that an in-depth analysis is prepared by an expert you trust.