In the current wave of extremist moods throughout Europe, as well as the radicalisation of politics in Slovakia, the exhibition at Kunsthalle Bratislava is presenting the works of contemporary artists inspired by the wartime Slovak State, which shows that history may repeat itself. 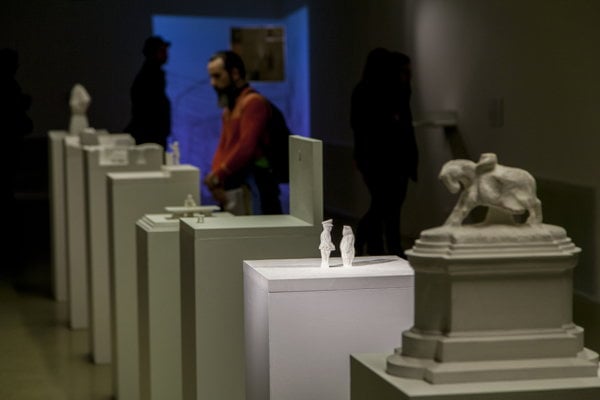 Look What Is Back / The Slovak State in Contemporary Art exhibition in Kunsthalle Bratislava (Source: TASR)
Font size:A-|A+

The exhibitions also show – especially compared to the exhibition in the Slovak National Gallery (SNG) which presents period art of the Slovak State – that art seems to move rather in a spiral, adding some extra ideas and changing style over the course of time.

The artworks at Kunsthalle have not been tailor-made, but existed independently of the exhibition, with the exception of a single adaptation.

“This proves,” Kunsthalle Bratislava writes, “that contemporary art does not avoid this complex socio-political theme but reflects it repeatedly, in the spectre of several generations of artists. The exposition clearly shows that artists ask similar questions as ordinary citizens: How do we deal with the heritage of the clerical-fascist state? Delve deeper, or ignore it? Try to understand it? Despise it? Apologise for it?”

What is the legacy of the the wartime Slovak State....

The Slovak State that existed between 1939 and 1945 was a satellite of then-Nazi Germany, with the representatives of the Catholic Church being top politicians and crucial allies of German Fascists.

The SNG exhibition presents documents, propaganda artefacts and artworks from that period, both hailing and criticising the political, economic and social development. The exhibition Look What Is Back / The Slovak State in Contemporary Art in Kunsthalle, on the other hand, brings rather the perception of 24 modern artists who look at this period retrospectively and “speak the language of our times”, as one of the curators – Katarína Bajcurová, Petra Hanáková, Bohunka Koklesová and Nina Vrbanová – said at the exhibition opening. She added that they want to keep pace with current developments, not just concerning popular trends in the art scene but also concerning hot topics and issues of Slovak society. 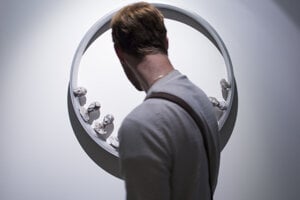 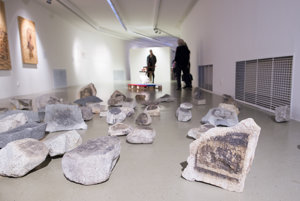 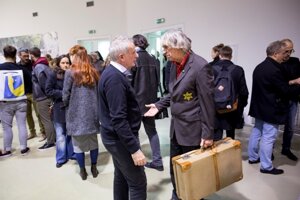 The curators, just like the artists, represent various generations and also diverse views. The artists on display vary from “classics” of the second half of the 20th century, like Jozef Jankovič and Rudolf Sikora, through the middle generation to younger artists – e.g. Ilona Németh, Svätopluk Mikyta, Martin Piaček, or Jaroslav Kyša.

The genres displayed are also diverse, including video-projections, statues, and installations. The approaches are varied as well: critical, ironic, action-like, performative, and symbolic. Some are more about direct artefacts or historical facts, while others focus more on current perceptions of historical events in the context of a specific site and local memory.

The current event is connected to previous exhibitions in Kunsthalle, which have all presented engaged art on hot social and cultural topics. Some of the works displayed here have already been presented at other venues – some are “chronically known”, as the curators put it – but their combination on one floor of Kunsthalle is unique.

The exhibition at Kunst-halle, in the SNP Square 12 of Bratislava, lasts until February 26, and is open daily except for Tuesdays. It is serviced by “mediators”, i.e. art students and fans who help explain the connotations and contexts of individual artwork.

The topicality and earnestness of this theme shows that Slovakia has not come to terms with its past yet, curators noted during the opening, and added that artists and their perceptions open questions – in this case regarding the heritage of the Slovak State – rather than offering answers.