The traditional swim took place in water of 2.5 degrees Celcius. 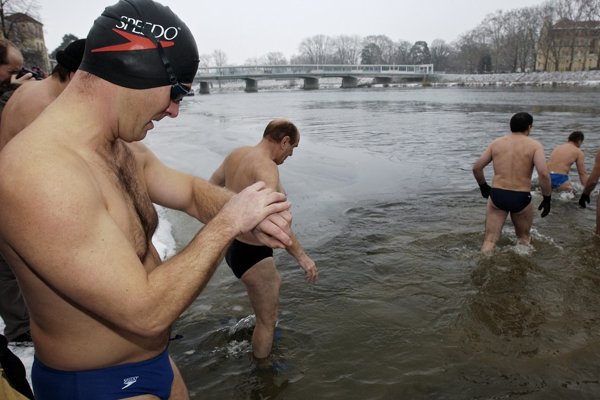 Winter outdoor swimmers converged on the bank of the Váh River in Piestany on December 26 to enjoy their favourite and traditional St. Stephen's day swim.

The event saw the participation of more than three dozen locals as well as members of Polar Bears clubs from Nové Mesto nad Váhom (Trenčín region), Vrbové (Trnava region), Bratislava, Leopoldov (Trnava region), Trnava and even Austria. Around 300 people watched as they took a dip in water with a temperature of 2.5 degrees Celsius, the TASR newswire reported.

The air temperature stood at 10 degrees.

"This is the optimal situation as far as temperature goes," said Martin Valo, chair of Piešťany Winter Swimming Club, as quoted by TASR. The swimmers first sang their anthem and then plunged in. The longest stay in the water was 22 minutes.

The popularity of winter swimming has been growing in Piešťany, with many former sporting figures among the latest converts. Among the swimmers was Jozef Macejka of Piešťany, who in his eighties came to give swimming in the Váh River a try for the first time.

"It's never too late, it's all just a matter of heart and common sense," said Valo, adding that Macejka underwent preparatory training.