Unlike the three days of Christmas, of which especially the first two are more low-key and family occasions, New Year’s Eve means going out, socialising and enjoying memorable parties. 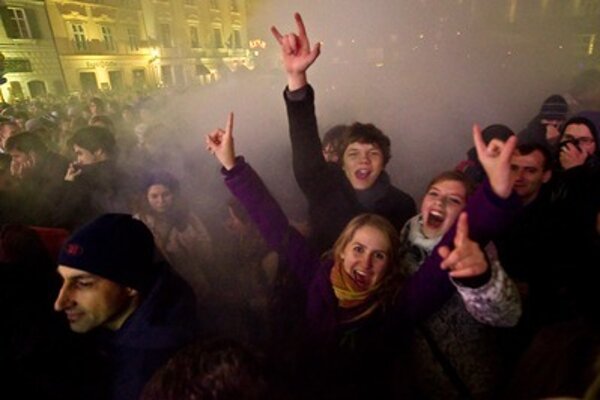 For those who prefer bigger, outdoor events, most Slovak cities and towns offer concerts, fireworks and cultural programmes in the main streets and squares and more and more, special events for children are being added.

In the second biggest Slovak city, Košice, the Silver, or New Year’s Eve party, will focus around the Immaculata statue in the Main Street beginning at about 20:00, with music by Nicol McCloud, the Kmeťo Band, the Šarišanci folklore troupe, the Miro Žbirka Revival, the Cheerleaderky group, DJ Pepo, and the host for the whole evening, Richard Herrgott.

Earlier in the day, the Košice Children’s Railway will bring a special, festive ride on the historical train, called the Silvester Express, from Čermeľ station (at 11:20) and back to the Alpinka station (at 13:00). In the meantime, children will be able to make paper pigs at a workshop, and enjoy a cultural programme.

In Prešov, popular bands like Heľenine Oči and G.O.D’s will play, and a firework display at midnight followed by a disco will help locals and visitors to make it smoothly into 2017.

In Michalovce, the competition, shooting a cork from a bottle of sparkling wine will mark the end of 2016, starting at noon in front of the town office. Ever more foreigners participate in this local “specialty” and also the number of all participants and onlookers has been growing in the past three years.

Banská Bystrica in central Slovakia, on the other hand, has dropped the boisterous celebrations on December 31 altogether and has now organised New Year’s fireworks in the late afternoon of January 1, together with the mayor’s address and a cultural programme, in SNP Square.

Children will have their own celebration in the town of Považská Bystrica for the first time, where they will be able to ice skate for free at the local ice rink from 14:00, with competitions and mascots. The celebration for adults will start at 21:00, in front of the town office.

New Year’s Eve in Nitra will be similar to the previous ones, with kiosks in Svätoplukovo Sqaure, and a cultural programme including the bands Dora, Zoči Voči and HS Senzus, between 22:30 and 1:00. However, the last day of 2016 will also bring a Zobor Silvester Run for all enthusiasts, starting from the Specialised Hospital of St Svorad and covering 3,860 metres.

The city close to Bratislava, Trnava, will celebrate with theatre and disco for children at 16:30, and the first fireworks at 17:30; to continue from 21:00 with DJ Paul La Poyd, his hits from the 1980s and 1990s, and midnight fireworks.

Unlike cities and many towns which will rejoice and try to entertain people, the administrators of the Tatra National Park (TANAP) ask visitors – but also hotels and entertainment managers – to keep the celebrations relatively calm and silent, without huge fireworks and much noise. Some animals have already hibernated but others usually do not – like the Tatra chamois – and the hustle-bustle could threaten them and even endanger their health or life. Pyrotechnics are banned in the TANAP altogether.