The supporter of Adolf Hitler has had several incidents with police. 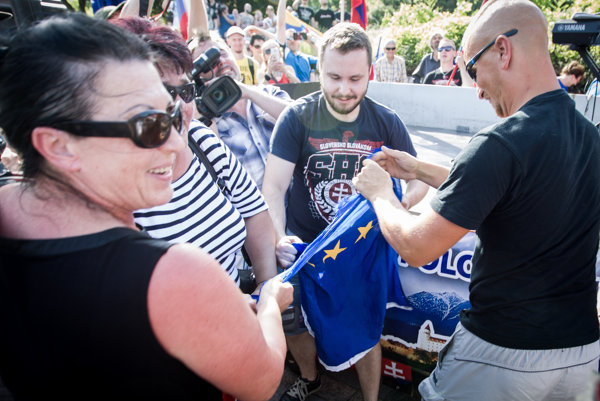 EU flag was torn and burnt during the protest in Bratislava in June 2016. (Source: Sme)
Font size:A-|A+

The police are investigating statements made by far-right extremist Marián Magát, who openly supports Adolf Hitler and Anti-Semitism and denies the Holocaust, the Aktuality.sk website reported.

“We can confirm that Marián M. is accused of Holocaust denial and approval of crimes committed by a political regime,” spokesperson for the Žilina police, Jana Balogová confirmed to Aktuality.sk.

She failed however to specify which statements he is to be prosecuted for.

Magát, who has organised protests against Islam and the EU, co-founded the extremist paramilitary group Vzdor Kysuce and ran for the far-right People’s Party – Our Slovakia (ĽSNS) in the March 2016 elections, said he does not deny the existence of death camps as they certainly were established. He also does not deny that people were dying there, as he said in a video published on a social network. 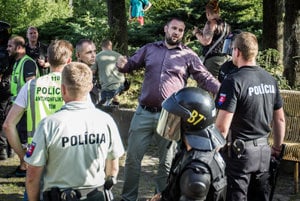 Magát has had several incidents with the police. Last summer, for example, he was invited to a hearing concerning the incident at one of the protests he organised, during which extremists tore the EU flag.

The police also dealt with him for his pre-election banner on which he was threatening asocial people and political thieves with labour camps, Aktuality.sk wrote.

In addition, the Czech police accused Magát of inciting hatred against a certain group of people in the summer of 2015 . He was detained during his anti-Semitic speech at the protest against immigrants that took place in Prague, the website reported.