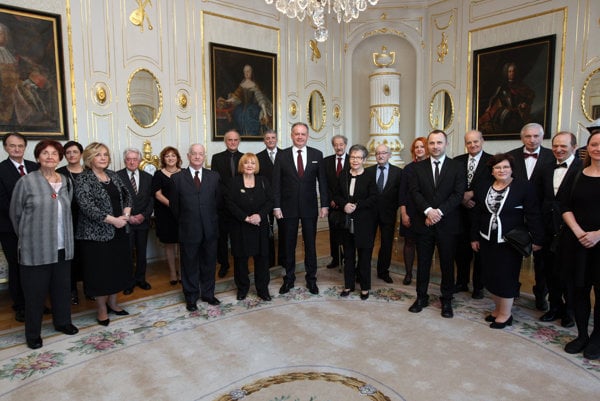 Efforts to honour and listen to those who protect and cultivate our collective memory are absolutely vital for the further democratic and civic orientation of our society, particularly in the current turbulent era of strongly worded statements and quick judgements, said Kiska, as reported by the TASR newswire.

“So that one day we won’t become victims of hatred or unknowing tools of old evils dressed in new garb,” the president stressed at the ceremony on January 9, as quoted by TASR. “[I’m talking about] the evil and hatred that we’ve managed to defeat once already at the cost of immense suffering and an enormous tally of victims.”

The president is convinced that the truth about Slovak history should not be ideologically tinged or well-intentionally embellished.

“We need to understand it and draw lessons from it, however,” Kiska said, as quoted by TASR. “All the more so because every year so far – this year included – we’re still bestowing awards on heroes who managed to take a stand against the demons of the past. It’s our duty not to squander the opportunity for a better life, which we have been given courtesy of their courage.”

The Order of the Double White Cross, 2nd Class was awarded to Czech director and actor Juraj Herz in recognition of his long-term extraordinary contributions to culture, movie art and the good reputation of the Slovak Republic abroad; and to Czech singer Michael Kocáb for his long-term extraordinary contributions towards the general improvement of relations between the Czech Republic and Slovakia.

Many of the awarded personalities addressed by the Sme daily said they were pleased by the orders from Kiska.

“I am really glad to receive it from the current president because most of his steps concerning political correctness and ethics is very close to me,” Kamenec told Sme.