Political analyst considers it a response to falling support and return to its successful rhetoric. 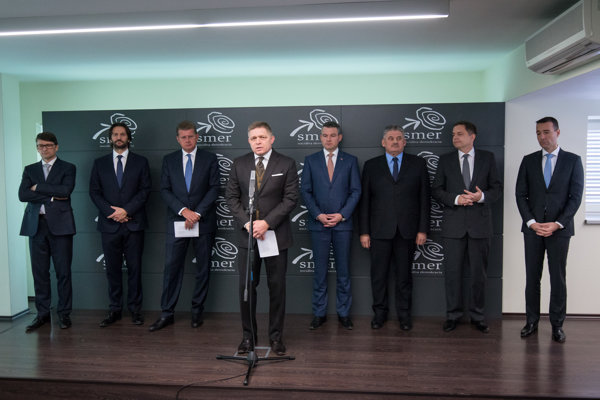 The ruling Smer party has introduced its priorities for 2017, focusing particularly on the domestic front to get people to trust the government. A political analyst, however, sees it only as a kind of delimination towards it coalition partners.

“We are eminently interested in spending all our energy on the domestic front in 2017,” Prime Minister Robert Fico told a January 10 press conference, as quoted by the TASR newswire. “The best protection against extremism and dilettantism is if people trust the governing structure, if they believe it's capable of bringing results and transferring good economic results into their everyday lives.”

2017 should be the year of action for Smer. Measures to be taken by the ministers of his government have one feature in common – they will be leftist, said Fico.

“Smer is a leftist social-democratic party and we are eminently interested in doing politics of this kind,” the prime minister stressed, as quoted by TASR.

He highlighted how Slovakia managed the Presidency of the Council of the EU, and also recalled last year’s general elections and the formation of a government that can be labelled “the government of a historical compromise”. Despite its differences, the current government is extraordinarily stable, stated Fico, refusing speculations about early elections.

“The public also accepts that this government is professional,” Fico said, as quoted by TASR. “It’s the best answer for all those inventing senseless stories about early elections. However, it's primarily the best protection against extremists and dilettantes that the Slovak political arena currently features.”

Smer ministers presented this year’s priorities for their sectors.

Health Minister Tomáš Drucker plans to renew hospitals and build a new detention centre that Slovakia lacks, while Deputy PM for Investments and Informatisation Peter Pellegrini highlighted the assistance to be provided to underdeveloped regions. He also wants there to be Internet for all, regardless of their social status.

Labour Family Minister Ján Richter reiterated the plan to focus on supporting young families, unemployment reduction and removing discrepancies between pensioners. The government intends to motivate people to start working, he added, as reported by TASR.

Culture Minister Marek Maďaric highlighted support for the creative industry and the renewal of monuments. He also wants to complete the Holocaust Museum in Sereď (Trnava Region), which should enable youth to learn about Holocaust atrocities.

Interior Minister Robert Kaliňák talked about a need to address safety in Roma settlements. He plans to open new client centres and work on migrants being no longer an issue.

As for Finance Minister Peter Kažimír, he stressed the stability of the economy.

“Many resolutions mentioned by my colleagues are a prerequisite for us to have healthy and balanced economic growth,” Kažimír said, as quoted by TASR.

Political analyst Michal Cirner perceives the fact that Smer held the press conference on its own as a response to the party’s falling preferences and a return to the original rhetoric of the second Fico government.

“It is also an attempt to return to the so-called social packages, but in another form,” Cirner told the public-service broadcaster RTVS, adding that it is also related to upcoming regional elections.