Navigation on Danube suspended due to ice floes

Navigation halted on the evening of January 11 from Bratislava to the Hungarian border. 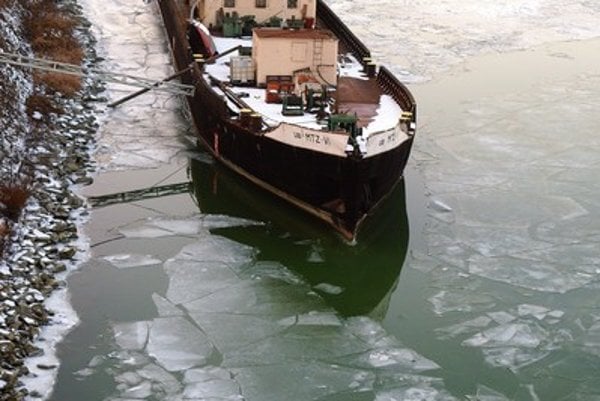 Despite the deployment of icebreakers earlier in the day, shipping on the Danube came to a standstill: In Bratislava harbour the icebreaker Brezno, in Čunovo, the Krupina icebreaker, and in the Komárno harbour, the BD DUNAJ tugboat, were all put into service to deal with the ice, the TASR newswire wrote. In case of thicker ice layers, the Slovak water-management Company (SVP) can also borrow a special icebreaker from Hungary; this step was last necessary in 2006. There were ice-floes everywhere on the surface of the river.

“We confirm the information on the suspension of navigation,” Eva Oravcová of the Transport Office in Bratislava told TASR. On January 10, navigation had already been suspended on the Hungarian part of the Danube.

An ice flood appears when a frozen watercourse causes ice-floes to move and these tend to stop at sites with a narrow profile, like gorges or bridges; they collect and impede the flow of the water. It usually occurs after sudden warming.

This phenomenon – that dates back to early Middle Ages – can cause dangerous, even critical flood situations. The first mention of the frozen Danube goes back to the year 793. However, the worst situation on record arose in the mid-19th century – when on February 5,1850 the Danube quickly rose and flooded Bratislava with up to 1,123 centimetres of water, causing huge damage to buildings along the river and six deaths. After having frozen in the years 1927 and 1928, as well as 1956 and 1963, the Danube was frozen for longest in the winter of 1946/1947 – for 90 days.

In 2006 , the frozen river complicated the lives of the inhabitants around the Gabčíkovo dam – the villages of Bodíky, Dobrohošť and Vojka. The ferry stopped operating, and the way to the opposite side of the dam was increased from 500 metres to 50 kilometres.