People today have the feeling that they can write whatever they like on online platforms without punishment, but this is due to the imperfect application of the law, says analyst. 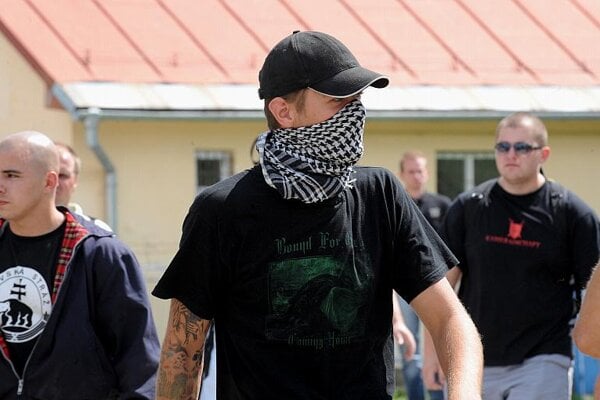 “Sending people to gas, even if it is just on the internet, is simply unacceptable,” President Andrej Kiska said in his New Year’s speech as he condemned hate and intolerance, both in the streets and on the internet.

On the same day, a new set of rules became effective in Slovakia that should bring more effectiveness in dealing with extremism, as its author, Justice Minister Lucia Žitňanská, expects. Extremism motivated crimes should now fall under the Specialised Criminal Court; until now, the 54 district courts handled such cases.

“Sometimes the same act was permitted in one district while in another district it was forbidden,” Irena Bihariová, head of the People Against Racism civic association explained for The Slovak Spectator. “Some kind of ‘district’ law arose and the new amendment can prevent it.”

Bihariová, who has been fighting against racism for 14 years, envisages the new structure as one that could bring more specialisation and expertise in the judicial processes, providing that judges and prosecutors undergo quality training.

Punishment of extremist crimes could become more effective and the high number of unrevealed cases could drop, Daniel Milo, an expert on extremism from the non-governmental Globsec Policy Institute, believes.

“The changes could also remove some holes and deficiencies in the [law],” Milo told The Slovak Spectator.

The problem is online

Extremist crimes dropped from 112 in 2012 to 30 in 2015, based on available statistics, but this is sometimes interpreted as a failure in the fight against extremism, Minister Žitňanská pointed out as reported by the TASR newswire.

The drop is the result of an inability to uncover certain criminal activities, which have often been transferred to the internet, thereby making prosecution more difficult, the minister opines.

Bihariová sees three ways how to fight extremism on the internet: balancing hate speech, using legal tools like monitoring the web followed by data backup to begin prosecution against the real perpetrator, and eliminating cyber hate.

“The point of the strategy is that society on its own call out hate speech on the internet,” Bihariová explained, and added that people shouldn’t limit themselves only to online discussions, but they should also write positive experiences with minorities on their blogs, call out the hoaxes which de-mask false messages, and use formats such as funny videos or infographics.

Milo also mentioned the need for a ‘hate-free majority’ in the society among the steps towards eliminating online hate speech. Other points on the list include increasing media literacy, encouraging critical thinking among the youth, and convincing social media companies to assume responsibility for the content on their websites.

People today have the feeling that they can write whatever they like on online platforms without punishment, but this is due to the imperfect application of the law, according to Milo.

Police should be more active

“The police have the biggest problem with revealing, investigating as well as prosecuting criminal acts, so the chance to prosecute the perpetrator is decreasing,” Bihariová noted and explained that important changes have to come also at the level of police investigators, to bring new methods and trainings.

Žitňanská also sees a lack of experts. Existing expert fields will be expanded in the near future, with a separate field dedicated to extremism, she claimed.

The Interior Ministry has so far not been especially active in the fight against extremism, Bihariová and Milo agree.

“The Interior Ministry has the largest authority in this field, but up to now the Justice Ministry has been more active,” explained Bihariová for The Slovak Spectator.

Another problem is citizens’ low confidence in courts, prosecutors and in the fact that perpetrators would be fairly punished, no matter their status or position. Many people have also lost confidence in political parties, which creates the right environment for extremists and non-democratic political subjects.

Changes are also needed among politicians, and what voters hear from them, Elena Gallová Kriglerová from the Centre for the Research of Ethnicity and Culture, noted.

“When politicians talk about migrants as a threat they create social tension,” she told The Slovak Spectator.

Similarly, pupils at schools should learn how to live together and not discriminate against minorities, she stated.

An active attempt to combat extremism came in early September when the Education Ministry sent methodical materials to primary and secondary schools, explaining how teachers should recognise extremism and fight against it.

But teachers mostly saw the manual as impractical for them and labelled it just a tick in a box for the ministry.

It would be more useful if teachers worked with prevention against extremism, Gallová Kriglerová noted.

“Schools should respect diversity and refuse to accept any suppression of democracy,” she said. “Values of the school should be present in its atmosphere, not only at the lessons .”