Composters should mushroom in 2017

As of this year, new and more specific rules apply for the separation of biodegradable elements from municipal waste. Composting is one of the two ways to dispose of green waste. 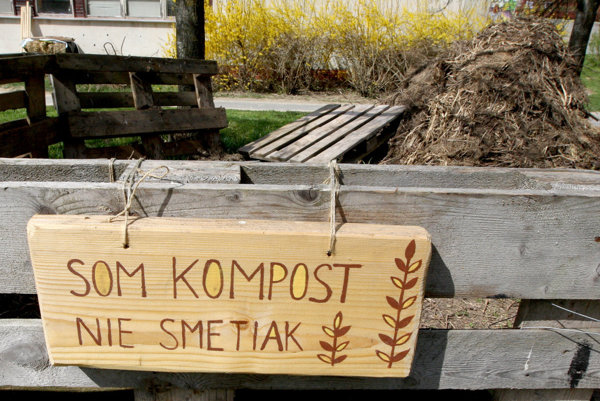 Waste separation gets a new spin as of the new year. As a result, composting should become the norm of every household in the country.

The idea behind the changes to the Waste Act that became effective as of the beginning of 2017 is, among others, to prevent black waste dumps. As of the new year, municipalities are obliged to establish and implement separate collection of kitchen biowaste from households, edible oils and fats, and biodegradable waste from gardens and parks, including waste from cemeteries, the Environment Ministry’s spokesperson Petra Stano Maťašovská, told The Slovak Spectator.

While there are still exceptions applicable for the separated collection of kitchen biowaste, municipalities have to ensure the separate collection of biowaste from gardens and parks, also known as green waste, without exception. That obligation is not a new one, but the law now describes it in a more detailed manner.

There are two ways municipalities can go about the separate collection of such green waste: either by providing containers of at least 120 litres and emptying them at least once every 14 days between March and November, or by making sure all family houses have a composter available to turn their green waste into valuable fertilizer. A combination of the two options is possible as well.

Biowaste, food remains, rinds from fruits and vegetables and waste from gardens, make up approximately 40 percent of all municipal waste, said Petra Ježeková from the Ekoporadňa environmental advisory group.

“This waste can be composted to gain valuable fertilizer – that is to return it to nature without expending much energy,” Ježeková told The Slovak Spectator. On the other hand, if such waste is left to decay at landfills or burnt in incinerators, it has a negative effect on the environment, she added.

The ministry promises support for municipalities with separation of biowaste, especially through the EU funds, to help them buy the necessary equipment, collection bins, or composters, said Stano Maťašovská.

Some villages already started mass composting before it was obligatory and now serve as good examples. These include the villages of Lietavská Lúčka in the Žilina Region, and Rakovice in the Trnava Region.

“The Municipal Council reconsidered options for composting in the village and decided that the best way is for every family house and block of flats to have its own composter,” said Marian Sliviak, mayor of Lietavská Lúčka.

Every apartment building in the village is now using a composter, while not every family house owner has picked up their composter so far.

People living in flats can also use a compost bin for biowaste with capacity of 10 litres together with compostable bags, which are biodegradable.

The village of Rakovice has also bought composters and rents them to its inhabitants free of charge. However, residents have to attend a lecture about composting.

“So far we have given out 110 composters to households,” Jarmila Chnápková from the Municipal Office of Rakovice told The Slovak Spectator.

Family houses have 900 liter composters, while two thousand liter composting bins were purchased for blocks of flats. The project is still quite new, as they only started in the second half of 2016. The households of Rakovice received their composters in September and October.

Municipalities may face a fine

Ježeková believes composting on a much larger scale is necessary, but people need to be trained and educated about it first.

“We see what people throw in the bins for plastic and paper, I cannot really imagine how the bins for biowaste would look like in cities,” Ježeková said.

Given the fact that separation of biowaste from kitchens would also require a well-prepared system of collection and processing of such waste, Ježeková believes that currently, it is more feasible for smaller villages and towns.

“In towns and cities, where collection points have already been constructed and are operating, we can conclude that there is an increase in the number of people using these collection points,” stated Stano Maťašovská.