Yet lack of qualified labour remains a challenge. 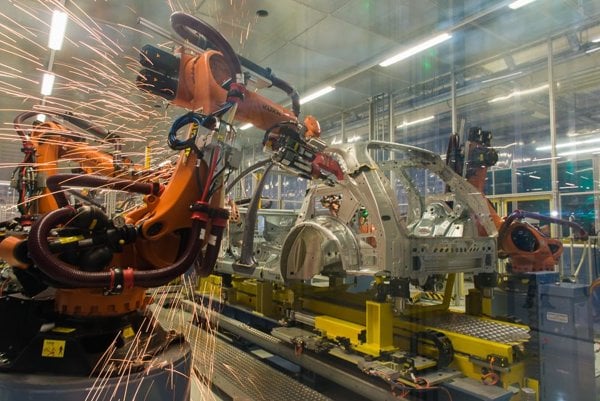 Carmakers in Slovakia keep breaking records in car production. After they exceeded the one million threshold in 2015 for the first time in history, they managed to increase production again last year. The Slovak Automotive Industry Association (ZAP) estimates that Volkswagen Slovakia, Kia Motors Slovakia and PSA Groupe Slovakia produced more than 1.04 million cars in 2016. Final figures will be known only after Volkswagen announces its results in March.

“It was an excellent year and this successful trend should continue,” ZAP president Juraj Sinay said on January 17 when introducing the figures. He added that exceeding the one million mark was expected as carmakers in Slovakia will launch production of new models in 2017.

In 2016, Kia Motors Slovakia near Žilina manufactured 339,500 cars and PSA Groupe Slovakia in Trnava 315,050 cars. Thus, production of Volkswagen in Bratislava is estimated at 385,450 units.

Peugeot Citroën Slovakia points to the new Citroën C3 model behind the 4-percent increase in production in 2016. It launched its production in late 2016 and manufactured almost 42,000 units. At Kia it was the new Kia Sportage that pushed up its car production, which began in 2015.

Slovakia, therefore, maintains its position as the world leader in car production, as carmakers produced 191 units per 1000 inhabitants.

Most of the cars manufactured in Slovakia are exported and due to the turbulent situation in the world, carmakers must seek out new export destinations. For example, after exports of Kia cars to Russia decreased, it found a new market in Israel. Last year, its Slovak branch exported there 6 percent of its production.

Now the carmakers are closely watching the situation in the United Kingdom due to Brexit as well as the USA, where president-elect Donald Trump indicated imposing a tariff of 35 percent on some vehicle imports.

New car registrations hit record figures in Slovakia last year. Slovaks bought a total of 88,163 new cars in 2016, an increase of 13.09 percent from the previous year. Škoda Fabia kept the title of the top selling passenger car when as many as 5,381 Slovak drivers opted for it last year. It was followed by Škoda Octavia with 4,938 sold units. In total, the market share of the Škoda carmaker was about 20 percent followed by Volkswagen, Hyundai and Kia.

In respect to future car purchases, Jaroslav Holeček of ZAP criticised new car registration rules to be valid as of February. While currently the more powerful the car the more drivers have to pay, the new formula for calculation of registration fees will also include the age of the car. Holeček is afraid that this might encourage people to buy older, stronger cars abroad and import them to Slovakia.

Currently, the ratio of purchases of new and old cars is 60:40, but the new fees may motivate people to buy older cars.

Holeček stressed that older cars mean more pollution as well as decreased safety on the roads.

Last year ZAP, in cooperation with the government, launched a €5.2 million scheme to support purchases of electric cars in Slovakia. From that sum they would like to see 1,000 electric or hybrid cars purchased. Each buyer of a new electric car is set to receive a contribution of €5,000, while those who purchase plug-in hybrids will receive €3,000.

As Pavol Prepiak of ZAP informed, they have registered as many as 74 applications for the contribution since the start of January. Of these, 25 were for utility cars.

“We would like to see continuation of the trend from 2016,” said Sinay. “We assume that carmakers in 2017 will again produce more than one million cars.”

For VW Slovakia, 2017 will be a kind of a threshold year as it will launch production of a new generation of the Porsche Cayenne. So far it has manufactured only bodies for this model. The carmaker will also open a new body shop and a new logistics centre later this year.

Kia plans to invest €130 million in 2017 while this money will be used in preparation for production of new engines and production of a new car model.

The British carmaker Jaguar Land Rover continues building its brand new plant near Nitra. Its construction started in the autumn of 2016 and the first cars will roll off production lines in 2018. The carmaker plans to manufacture in Slovakia 150,000 cars annually, while it plans to produce here the new Land Rover Discovery model.

Holeček of ZAP, estimates that the local automotive industry will need 14,000 new workers during the coming years, but schools might supply only about 4,000. Re-qualification training may bring between 5,000-6,000 workers and the rest could be foreign workers. While the Slovak government does not plan to ease employment of workers from non-EU member countries, companies can do so under special projects.

Based on ZAP data, the automotive industry directly employed 129,000 people in 2015 while an additional 121,000 people had jobs thanks to the existing automotive production in Slovakia.