Slovak Lines takes over operation of the 901 route. 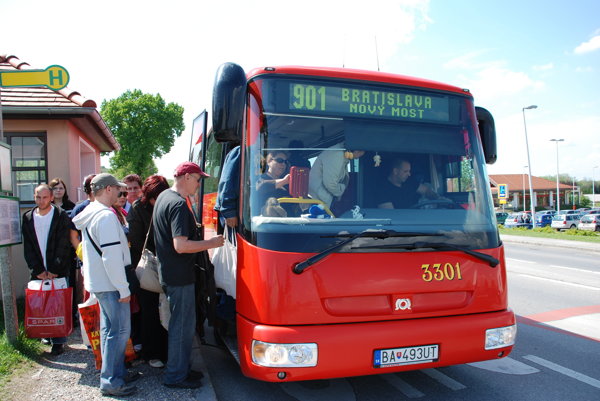 After eight years the bus line from Bratislava to the Austrian village of Hainburg, across the border, has changed operator. Until now the city transport company, Dopravný Podnik Bratislava (DPB) operated the line but as of January 15 the route has been taken over by the regional bus company, Slovak Lines.

The new operator has introduced few changes except that now the line starts at the main bus station in Mlynské Nivy. Other stops, Most SNP, Aupark, Einsteinova, Wolfsahl and five stops in Hainburg remain unchanged. The intervals have also remained unchanged and the buses run every hour, starting at 05:10. The final bus to Hainburg leaves Mlynské Nivy at 23:10.

“Because the line is now a bit longer, the buses depart from the stop at the SNP Bridge five minutes later,” said Eva Vozárová, spokesperson for Slovak Lines.

Fares too have remained the same. A one-way ticket costs €1.5 and a return costs €2.9. It is possible to buy tickets from the bus driver, at Slovak Lines kiosks, online via the website of the operator or via its mobile application.

Travel by this route is not covered by the so-called električenky, i.e. passes for mass public transport in Bratislava.

To maintain the comfort of travellers both operators will run the route during the first days of the change.