Tourists to get information also in English at city transport

To help the ever more tourists that come to Bratislava, names of crucial stops – e.g. terminal stops or those in and around city centre – will be announced in two languages. 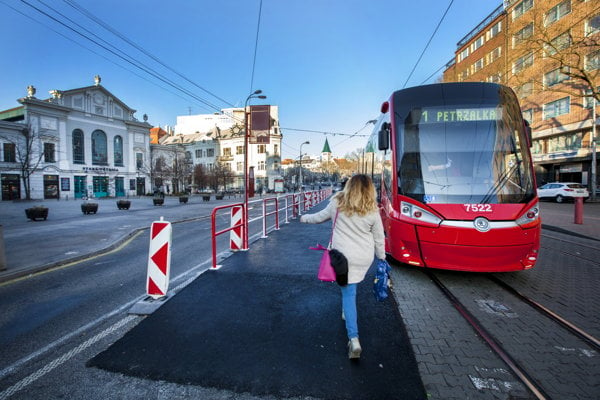 A new bus stop has also been added in the city centre. (Source: TASR)
Font size:A-|A+0

Beginning from February, the names of crucial stops on public transport will be announced not just in Slovak but also in English, the Bratislava Tourist Board (BTB) and the Bratislava Transport Company (Dopravný podnik Bratislava-DPB, a.s.) inform. Moreover, visitors of the capital will get information on which important and interesting sites lie close to them.

The impulse for this step results from the ever more increasing number of tourists coming to the city. According to statistics, the number of visitors increased by more than 16 percent in the past year. Also, historically the highest number of tourists were interested in the Bratislava City Card which enables a lot of discounts, a free sightseeing tour, and travel for free via city transport in the two urban zones closest to the centre, 100 and 101.

"We are happy that visitors use public transport," chairperson of the BTB, Alžbeta Melicharová, said, adding that to offer a still greater benefit, BTB and DPB have cooperated to make navigation and orientation of foreign tourists even easier. Together, they have selected key interchange and terminal stations lying close to sites of interest, and organised information on their vicinity to be said also in English. This information adds to the tourism infrastructure which was started last year with the replacement of big-sized maps in the streets of Bratislava, and with the gradual update of all booklets promoting the city and its attractions, Melicharová added.

The 24 selected points include, among others, the Trnavské mýto junction with an announcement that it is the interchange point of bus No. 61 heading for the airport; Ľ. Štúra Square with the nearby Reduta building of the Slovak Philharmonic; SNP Bridge, where passengers will learn about the UFO observation point on the top of the bridge; and the city centre with the possibility to board buses connecting Bratislava with Vienna.