The mystery of too serious card players

When and where this fascinating photo was made is a mystery - the only lead the image of three card players fascinated by a bottle of wine reveals is its publisher. 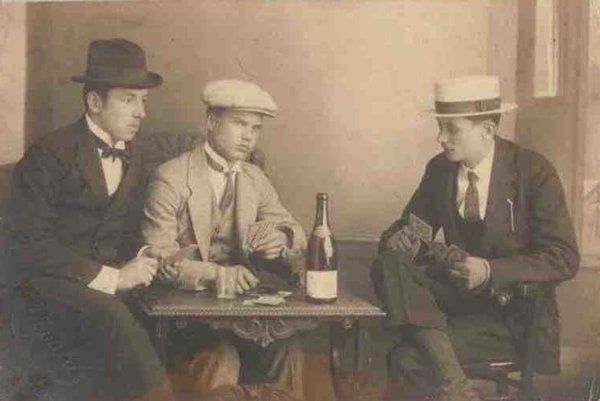 The name Divald is well-known to all people interested in the history of photography. Karol Divald, one of the pioneers of this craft in Great Hungary, was born in Banská Štiavnica in 1830. He had studios in several locations in northern Slovakia, as well as – for example – in Budapest.

To make the search for the origin of the postcard still more complicated, Divald had three sons and all of them had their own studios as well. Thus, the only thing we can estimate with as at least some certainty is the date when this picture was made. The gamesters’ clothes and the way the publisher is presented on the postcard put our estimate around the break of the 19th and 20th centuries.

It is pity that the wine label can not be read, although it seems it had been turned deliberately so that it would be visible. If the well dressed gentlemen were playing cards in Bardejov, or in Starý Smokovec, they could easily drink wine from the Small Carpathian region which used to be distributed around the whole Empire. Many wine-makers were very successful and won innumerable competitions. For example, Peter Jaklitsch of Prešpook (today’s Bratislava) with his white and red-rosé champagne won medals in Linz, Debrecén, Vienna, Salzburg, Pilsen and Wittenberg. Of course, the most renowned were the famous companies Hubert and Palugyay, but much smaller wine-producers were also successful. The “mountain wines” of Prešporok used to be very popular at that time; maybe the three card players were enjoying just that sort of wine.