Slovakia stagnates in fight against corruption

Slovakia should focus on the exercise of power rather than changing laws says report. 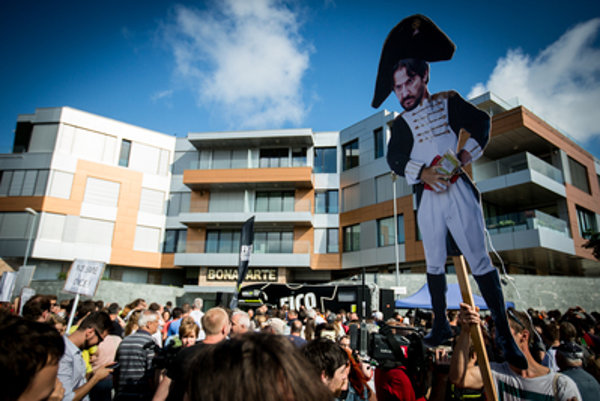 Protests in front of the Bonaparte residential house in Bratislava, held in connection with the Bašternák case. (Source: Sme)
Font size:A-|A+

Slovakia fell to 54th place in the Corruption Perceptions Index 2016 published by the ethics watchdog Transparency International. Though it kept the score of 51 points out of 100, it dropped by four positions compared with last year’s edition as the number of surveyed countries increased from 168 to 176.

Slovakia ranked as the seventh worst country of the European Union, leaving only Croatia, Hungary, Romania, Italy, Greece and Bulgaria behind.

To improve its position, not change in legislation but rather the exercise of power will be the decisive factor, according to Transparency International.

“The first year of the third Robert Fico government indicated that the fight against corruption will continue at a declarative rather than real level,” Transparency International Slovensko (TIS) stated in a press release.

No top politician or businessperson was sentenced for corruption in 2016. On the contrary, the Bašternák case and the termination notice submitted by former top investigator of the Gorilla case confirmed that equality before the law does not apply to people close to the ruling politicians.

“With his statements and attitudes in both cases, Interior Minister Robert Kaliňák even undermined the trustworthiness of police,” the press release reads.

Slovakia’s Presidency of the EU Council was also surrounded by suspicions of nepotism pertaining to orders. Former employees of the Foreign Affairs Ministry, Zuzana Hlávková and Pavol Szalai, who reported on the dubious practices, as well as journalists witnessed accusations and humiliation rather than a proper explanation of the practices, according to TIS.

“The Foreign Affairs Ministry still illegally refuses to provide access to the crucial documents that would definitely confirm or disprove the suspicions,” TIS wrote in the press release.

The watchdog also pointed to the law on the protection of whistleblowers adopted by the second Fico government (2012-2016) two years ago. The law not only has weak results, but also it was ignored in the case concerning the orders.

TIS also claims that the government neglects its own attempt to check the effectiveness of big state spending via the Value for Money initiative. It has been avoided during the discussion about the big investment into construction of the Prešov bypass, for example.

On the other hand, the watchdog praised stricter rules introduced by the amendment to the anti-shell law.

“To make it more effective, the government should actively lob for introducing a register of companies’ owners also in other EU countries,” TIS wrote in the press release.

It also praised the draft amendment to the law on free access to information that should make it more effective and extend the right of people for information.