The successful test of the pressurising of the primary circuit of the third block in the Mochovce nuclear power plant (AE) is a crucial milestone in the finalising and completing the construction. 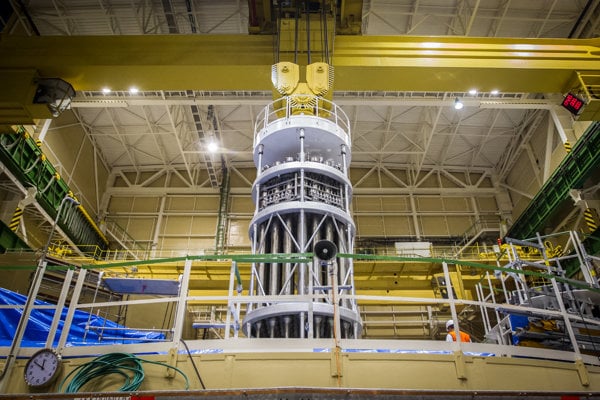 The Slovenské elektrárne (SE) power utility made the test on six steam generators and piping connected to the reactor of the third block on January 31st. They had to withstand a pressure of 19.12 MPa's, almost 190-times common atmospheric pressure, for ten minutes.

The primary circuit system was filled with water and gradually pressurised to the level required, project manager for the finalisation of the third and fourth blocks in Mochovce, John Clark, told the TASR newswire, adding that the test included 208 armatures and that such a pressure was possible thanks to their functional hermetic sealing.

The system and components can safely manage a pressure 1.5-times higher than usual during normal operation, Clark said for TASR, and added that all relevant facilities were checked and remote manipulation from the block control room was successfully tested.

After this pressure test, SE will continue preparing the components and systems of the third block for the next milestone: the cold hydrostatic test focusing on the integrity of weld joints and interfaces connected with the facilities and piping working under pressure, for example, the pressure vessel, piping, pumps and armatures of the reactor’s cooling system.

The pressure test is one of the key conditions for launching operations at the nuclear power plant. The third block of AE Mochovce is 94 percent finished, and the fourth block is 80 percent finished. Totally, 60 million man-hours have been spent on the construction.