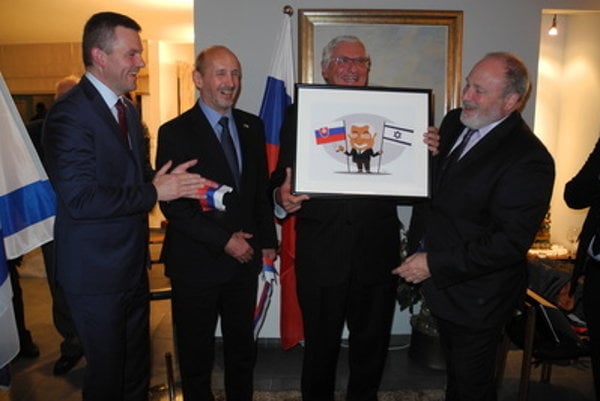 Deputy Prime Minister for Investments and Informatisation Peter Pellegrini opened the Slovak honorary consulate in the Israeli city of Haifa on January 31.

The ceremony was attended by a representative of the Israeli Foreign Affairs Ministry, Meron Reuben, as well as Slovak Ambassador to Israel Peter Hulenyi.

Haifa is a place with huge potential in trade, science, technologies and research, Pellegrini said, as quoted by the TASR newswire. He pointed to the fact that Haifa is one of the strongest academic centres in Israel with three Nobel Prize laureates coming from this city. He later held a meeting with Haifa Mayor Jona Jahav at the municipal office, and subsequently the Slovak delegation moved to the Matam hi-tech park.

The Slovak Vice-PM also delivered a speech at the opening of the CyberTech 2017 world conference in Tel Aviv. This is one of the biggest conferences in technologies and solutions for cyber security. The conference was opened by Israeli Prime Minister Benjamin Netanjahu, Michigan Governor Rick Snyder and various personalities in the cyber business.

Cooperation in digitisation of public sector

Peter Pellegrini and Israeli Social Equality Minister Gila Gamliel also signed a joint declaration to cooperate in digitisation for the public sector in Jerusalem on February 1.

“With madam minister, we signed a declaration to cooperate in modern and digital technologies,” said Pellegrini, according to TASR. “I’m very glad that this memorandum will allow us to boost the bilateral exchange of experience and know-how but it will also help in the exchange of, for example, students and professionals in the field of modern technologies and cyber security. Israel is a leader in these fields and I strongly believe that the declaration will partly intensify expert cooperation between Israel and Slovakia.”

Pellegrini, along with the Slovak delegation of entrepreneurs, is on a working visit to Israel, during which he also held talks with Israeli Minister of Science, Technology and Space Ofir Akunis, and took part in the Israeli-Slovak business forum.