The detainees include one of the bosses, a former elite polcie officer and a former candidate for the Slovak Olympic Committee. 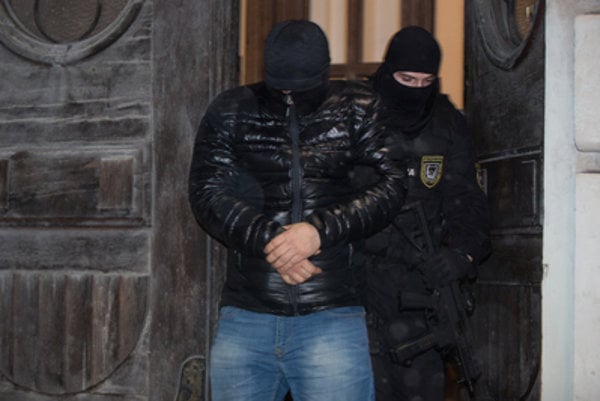 Members of the Takáčovci gang are brought to the Specialised Criminal Court. (Source: TASR)
Font size:A-|A+

The Specialised Criminal Court (ŠTS) in Pezinok, Banská Bystrica branch, took six alleged members of the gang into custody on February 1, while releasing seven others, spokesperson of the General Prosecutor’s Office Andrea Predajňová informed the TASR newswire. The prosecutor from the Special Prosecutor’s Office (ÚŠP) filed a complaint against the decision, which the Supreme Court will deal with. The Office requested that all 13 suspects remain in custody. Among the six imprisoned are, according to information available to TASR, one of the bosses, Ľubomír K., aka Kudla, and former unsuccessful candidate for the Slovak Olympic Committee identified as Milan J. who was in the Slovak bob-sleigh team at four winter Olympics, according to the SITA newswire. Also detained was the former deputy head of the SWAT team of the National Criminal Agency (NAKA), lieutenant colonel Branislav B., nicknamed Baki.

“The reasons for custody are fears of potential influence of witnesses and continued criminal activities,” spokesperson of the ŠTC, Katarína Kudjáková, said for TASR, adding that the decision is not effective yet.

The judge for the preparatory proceeding of the ŠTS originally began to consider the decision to take all 13 members of the gang into custody during their hearings on January 31. They were brought to court by NAKA on January 29 after a raid called Aladdin, including the alleged boss Ľubomír K. – who, however, reported to the police voluntarily. Then, seven were released.

ÚŠP prosecutor Alexander Bíró confirmed on January 31 that the men are members of the so-called Takáčovci gang. They face charges mostly of “founding a criminal gang, blackmail and fraud at top levels”. He requires pre-trial custody for some, fearing they may influence their accomplices and thus mar the investigation. Some may even, according to him, continue criminal activities or flee.