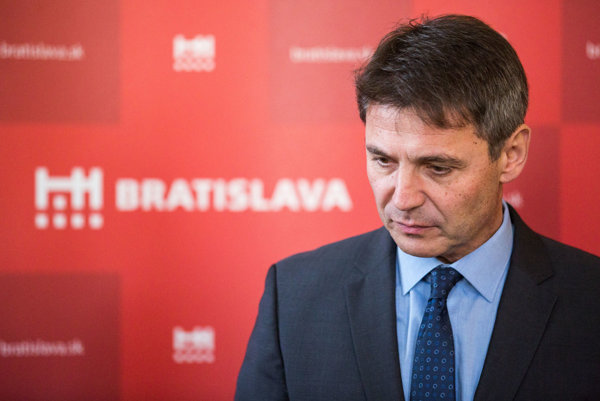 Public humiliation, cutting registered work hours and extreme supervision, Bratislava municipality employee, Zuzana Aufrichtová experienced all of this after she complained about a poorly written parking policy analysis that cost almost €100,000 and was hidden from the public. Due to constant pressure from superiors and her seriously ill mother, she decided to leave and publicly tell her story. Soon after, other ex-employees volunteered to speak out.

“After I directly confronted Bratislava Mayor Ivo Nesrovnal with those serious mistakes my superiors started to attack me in various ways,” Aufrichtová told The Slovak Spectator. “I knew that they were just looking for reasons to fire me.”

Tatiana Kratochvílová, Bratislava’s former chief traffic engineer described similar experiences. As one of the leading people in the municipality she pointed out preference given to a certain supplier before others, or interference in selection procedures. Subsequently, she too experienced bullying which forced her to leave.

“An increasing amount of information is being hidden and [the municipality] lacks transparency,” Tatiana Kratochvílová, Bratislava’s former chief traffic engineer told The Slovak Spectator. “People who are pointing that out get punished.”

The Slovak capital, however, denies such practices.

“We have not registered such complaints,” municipality’s spokesperson Ivana Skokanová told the Slovak Spectator. “If they occurred they have to be recorded.”

Read also:Hlávková: I wanted to do the right thing Read more

To prepare a new parking policy, Bratislava City Hall needed an analysis of revenues and expenses. Instead of launching a public competition to hire an external firm, it directly approached Deloitte. Bratislava already has a general contract with the company for audit services, therefore, it officially presented the parking analysis as consultations which are part of the audit services contract.

The municipality ordered 1300 hours of those consultations at a rate €65 per hour. The price reflected the tariff rate in the contract, according to Skokanová.

Deloitte was probably in a rush, as it handed over the audit with a serious mistake which would likely cost the city €1 million per year. It did not reflect the costs of the municipal police enforcing the new rules, according to Aufrichtová. The team working on the new policy, including Aufrichtová, pointed out the mistake and the firm corrected it.

Yet she also discovered that Deloitte does not want the public to see the data. Thoug, as she recalled, the firm allowed municipal MPs to see it.

“As the analysis is paid for with public money it didn’t seem right to me to hide it from the pubic,” Aufrichtová said.

Deloitte’s concluding report also contains recommendations concerning the process of future public procurement, which is the reason why it is not accessible to the public for the time being, according to Skokanová.

However, even the Supreme Audit Office criticises the Slovak capital for concealing the contract.

“It is unacceptable that documents regarding public offers and financed from the budget of a self-government are concealed,” Daniela Bolech Dobáková told The Slovak Spectator.

After Aufrichtová pointed out the hidden analysis, her superior yelled at her and asked how dare she criticise a service provider. She then sent an e-mail to the Bratislava mayor to explain her doubts. The municipality subsequently adopted rules saying that its employees are not allowed to communicate with Nesrovnal or municipal MPs, Aufrichtová described the consequences.

“They also started to ask me with whom I have lunch and my superior demanded reports about my meetings,” Aufrichtová said. “It was strange but I saw it as part of tense situation.”

There is no ban against employees communicating with the mayor or the city’s MPs, and city hall has organisational rules for such communication, Skokanová responded.

However, the ban is not listed in the official rules but was ordered by superiors during a staff meeting and its violation would be considered serious misconduct, possibly leading to losing one's job, according to Aufrichtová.

Later, someone changed her records of worked hours per month so she did not fulfil the required amount. This would again be a serious violation of the rules.

Eventually, Aufrichtová left the municipality at the end of 2016.

“I can prove all my claims and I’m willing to confront Mayor Ivo Nesrovnal,” Aufrichtová said.

The same people bullying Aufrichtová were also dealing roughly with Kratochvílová, she says. For example, the municipality director was publicly defaming her for fabricated rules violations. Furthermore, she faced a disciplinary commission and some workers were not allowed to speak with her.

Those people are trying to rule the municipality behind Nesrovnal’s back, according to Kratochvílová

“We won’t respond to questions that are presenting lies and manipulative claims to readers,” Skokanová responded.

As an example, Kratochvílová pointed to city hall’s intervention in the public competition for the head of the traffic engineering department. Despite the fact that Ján Kovalčík won the competition, the municipality decided that he will not get the position.

“It happened because someone called,” Kratochvílová told The Slovak Spectator. “Municipality director Martin Maruška called me and openly told me that Kovalčík simply could not win.”

Kratochvílová set the conditions for the new head and the commission is no obliged to choose from among the candidates, according to Skokanová.

Former employees agree that the bullying began after they pointed to some shortcomings or suspicions at the municipality. They experienced yelling, name calling and even public defamation at staff meetings.

“It was unpleasant, I discussed it with my lawyers but it cannot be compared to bossing which Kratochvílová experienced,” Uhliariková told The Slovak Spectator.

Most employees have one-year job contracts, therefore, the municipality does not have to fire problematic people, it simply does not prolong their contracts, according to Uhliariková.

The National Labour Inspectorate received two complaints of bullying in the last five years, both of them in 2016. The subsequent inspection found no violation of legislation, according to the inspectorate’s spokesperson Viliam Kukumberg.

There are dozens of people who have left due to bullying, according to Feik.

“They were primarily experts who have not been replaced and then we cannot be surprised that projects such as the Old Bridge, road reconstruction, competition for public lighting, parking policy and others are finished late,” Feik told the Slovak Spectator.

There are probably more of such people and it would be easier for them to protect their rights even in court if they were united, according to Petrusová.

“At first I didn’t want to act publicly but now I see that there are many of us and we should unite,” Petrusová told The Slovak Spectator.