U.S. Steel: Will they stay or will they go?

The Slovak cabinet has confirmed that U.S. Steel is in talks over the potential sale of its Slovak subsidiary, U.S. Steel Košice (USSK). The American steelmaker, which announced a multi-million dollar global loss in 2016, has neither confirmed nor denied that it plans to sell its plant in Košice, where it employs about 10,000 people.

Chinese firm He Steel currently appears to be the leading bidder. U.S. Steel, which is currently the biggest employer in eastern Slovakia, signed a memorandum of understanding with He Steel in late January, the financial daily Hospodárske Noviny reported.

“We know that some talks at the level of U.S. Steel and potential bidders are taking place,” said Economy Minister Peter Žiga, as quoted by the TASR newswire. “However, I do not have enough information to make any specific comments. We received an assurance on the part of U.S. Steel that once they get to a place where they have ‘anything tangible’, we will be ‘invited to the table’ for trilateral talks.”

The minister emphasised that U.S. Steel is a private firm.

“Therefore, it’s by virtue of goodwill and our high-quality relationship that we were even given such an offer, so I have nothing to add in terms of comments at this stage,” said Žiga.

Prime Minister Robert Fico has earlier said that if the American owners decided to sell USSK, the state would consider acquiring part of the business.

Neither USSK nor its American parent have commented on any possible sale.

While the corporation as a whole reported a pre-tax loss of $165 million in 2016, U.S. Steel Europe, which is now comprised solely of USSK, registered pre-tax earnings of $185 million, the U.S. Steel website states.

Fourth-quarter results for its European unit declined compared with the third quarter, primarily due to rising raw material costs, in particular for coking coal and iron, it reports. These adverse impacts were partially offset by increased shipments and reduced spending.

However, the Košice plant suffers from a shortfall in investment, stemming from significant cuts by its American parent following the financial crisis in 2009, according to the Trend weekly. As a consequence, the technology at the plant has become outdated and is unable to compete with other steelmakers. Investments totalling at least €1 billion are estimated to be required. But these are necessary only in order to support ongoing production; steel industry experts estimate that an additional €1 billion is needed to bring the plant up to a level at which it can compete with top European producers like Voestalpine or ArcelorMittal.

Its outdated technology means that the Košice plant struggles to supply sheet steel to the high quality standards required by the automotive industry. Its galvanising line, necessary for production of high-quality added-value steel, is almost 10 years old and does not fully meet the requirements of carmakers any more, Trend reports. Construction of the line began in 2005 and U.S. Steel spent a total of US$160 million on it.

Ironically, a large market for automotive steel has developed in the region over recent years. Slovakia itself is already home to large factories run by three major carmakers – Volkswagen Slovakia, Kia Motors Slovakia and PSA Groupe Slovakia, which makes the Peugeot and Citroen brands – and the British-based firm Jaguar Land Rover is currently building a brand new plant near Nitra. More car manufacturing plants are clustered in neighbouring countries.

According to its own data, U.S. Steel has invested in $820 million (€760 million) in USSK over the last nine years, the Sme daily reported.

Most of the investments are required to meet ever-more stringent environmental protection standards.

Negotiations with the Chinese

The US steel giant and China’s He Steel Group signed a memorandum of understanding in Pittsburgh on January 26, Hospodárske Noviny wrote. He Steel has reportedly offered to pay €1.4 billion for USSK. Among others rumoured to be interested in acquiring USSK is the Czech company Moravia Steel, behind which stand Slovak billionaires led by Tomáš Chrenek.

The next step in a sale would be due diligence, which is expected to start in February.

He Steel already owns one plant in Europe – Železara Smederevo in Serbia, which it acquired from U.S. Steel last year.

A range of Chinese investors have been looking to invest in European countries over the last five years.

Stanislav Pánis, economic analyst with J&T Banka, sees two reasons behind the Chinese interest. Firstly, via acquisition of companies they can obtain barrier-free access to the European single market, home to more than 500 million consumers. Secondly, they would kill two birds with one stone by exporting capital from China, where there is currently a low return on investment, he said.

“In their efforts to export their capital and diversify, they are willing to pay almost any price, much higher than their rivals,” Pánis told the Pravda daily. 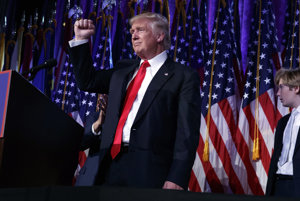 Read also: Trump to lure US firms back. How will this impact Slovakia? Read more

The sale of the Košice plant may be also be beneficial for its American owners, as US president Donald Trump is offering incentives and tax relief to US companies if they return parts of their business to the US. In particular, Trump has promised that he will reduce corporate income tax from 35 to 15 percent, but will impose a tax of 41 percent on US companies doing business abroad, Pravda wrote.