Handmade in Slovakia, sold to the world 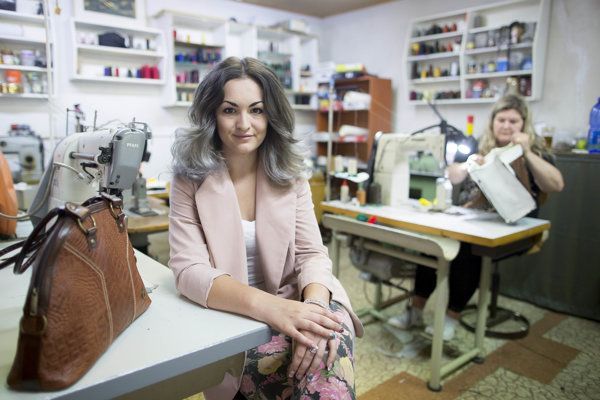 When a historical fencing group needed costumes from the Viking era, Anna Marková was the one to help out. From then on, she started earning her living by sewing historical costumes.

“I started sewing for my friends, then for friends of friends, and suddenly, when I finished my studies of art history, I was earning enough by sewing costumes and did not need to find another job,” she described her beginnings for The Slovak Spectator.

Today, Marková runs her own label: valgred, and sells about 80 costumes a year. She also has employees for sewing. Costumes and embroideries are handmade, only some stitches are made by a sewing machine, if the customer prefers.
Half of her customers are from the USA, many are in Europe, but there are also some from Australia. Only about 5 percent of all her customers are Slovaks, Marková estimates.

“In Slovakia, we have many skilful people who know how to sew mainly because of their parents, in the previous regime it was more of a necessity than a hobby,” Marková explains why she believes her business is so popular abroad, adding that in western Europe, tailoring is rare.

Her story is only one of many stories of skilful Slovaks who have had their hobby suddenly turn into a profitable business.

Welcome to the handmade universe

The Slovak version of the worldwide Etsy.com and Czech Fler.cz is SAShE, the biggest online platform uniting Slovak craftsmen, designers, or simply crafty people with creative hobbies who want to sell their handmade products online.

As of October 2016, when the portal celebrated seven years of existence, there were 6,000 vendors registered on SAShE, almost 23 million clicks on the website, and 5.8 million products sold since October 2009, when the platform officially launched. The website’s statistics reveal that Christmas decorations and wedding gifts are what Slovaks have sought most from the offer of handmade products. In 2016, the biggest trend was modern folk, based on the most searched keywords on SAShE.

From among thousands of vendors on SAShE, several have built up their businesses based on their handmade products.

“There are some family brands on SAShE that literally grew before our eyes, they began to thrive and the creator was subsequently able to employ family members and set up a company,” said Saša Miklášová, who founded SAShE.sk with her husband, for The Slovak Spectator.

Bags sold around the world

Dajana Rodriguez is a young student of fine arts from Partizánske.

She is one of the craftspeople who started out on the handmade portal. She sewed her first bag with her mum five years ago.

“It took several days, however, it was a simple bag,” Rodriguez reflected on those days, as quoted by the Sme daily.

Rodriguez is Slovak, but as her name suggests, she has Caribbean roots. Her Cuban father, Raul Rodriguez Romelo, had made his living for years by making leather jackets.

Dajana Rodriguez and her mum weren’t interested in founding a big business, she admitted for Sme. But after some time, there were more and more people demanding her bags.

“We have the technology – workroom and machine – thanks to my father, so we have conditions to start larger production,” explained Dajana Rodriguez for Sme.

Nowadays, Rodriguez no longer sews and she sees her future in designing bags. Her company produces 150 bags a month, and creates 95 percent of her income.

“Customers appreciate the work of small entrepreneurs, they are interested in the production process and they like to know the origin of the product,” Rodriguez explained the success of her business for the Dobrenoviny.sk website.

Her bags are in demand in Slovakia and beyond, and she now admits that she is ready to expand more in the future.

“It is said – start a business with something you miss on the market,” he told The Slovak Spectator. “I wanted to buy a men’s bag, but the one I can take to gym as well as to work. I found some, but either I don’t like design or the price was excessive. So, I designed a bag for myself.”

Now he is working on more designs and launching an online shop to be able to sell his products worldwide.

Online is, however, not the only way to sell original Slovak designs. In Bratislava’s Old Town, a shop with clothes, Kompot, sells its own brand as well as products of several Slovak brands.

SlovakiaGift features T-shirts, bags, pillows and postcards with folk motifs; Lemur is specific because of its T-shirts with faunal motifs that glow in the dark; original Slovak socks are well known under the name Fusakle; the brand Puojd which is behind the folk design of socks for Slovak Olympians in Rio 2016, and many others.

Meanwhile, SAShE keeps the number of its sellers artificially within borders, but there could be many more than the current 6,000, Saša Miklášová said for the HNonline.sk website. Also, customers’ interest is increasing, based on SAShE statistics.

“Every month we find a new talent, the Slovak market is really strong in producing handmade products,” Miklášová told HNonline.sk.