After rumours of a coalition crisis caused by dispute over high energy prices spread around Slovakia, the PM rushed to assure that the coalition is fine and striving, but later he admitted that they need to communicate more effectively. 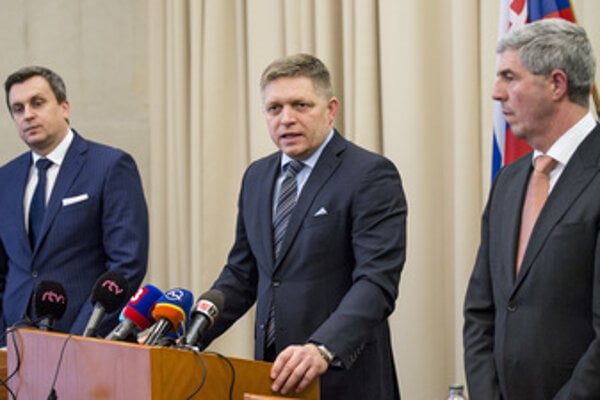 The ruling coalition has been living its normal inner life, said Prime Minister and Smer chairman Robert Fico said ahead of the Coalition Council meeting on February 8. These are three parties – Smer, the Slovak National Party (SNS) and Most-Híd – that have different opinions on many things but the coalition has been formed and is bound by the government manifesto, he added, as cited by the TASR newswire.

Fico admitted that he was also concerned about steps taken by the Office for the Regulation of Network Industries (ÚRSO), so he is not surprised that someone else is concerned as well. Outgoing ÚRSO head Jozef Holjenčík was heavily criticised by the coalition party SNS. However, Fico stressed that the reaction to URSO’s steps was rapid and resolute. “It is my intention and in my interest that the government functions and meet its commitments stemming from the government manifesto,” Fico said. “I’m not interested in anything else.”

SNS vice-chair Jaroslav Paška admitted that the energy sector has found itself in a difficult situation. Another SNS vice-chair, Anton Hrnko, said for TASR that there are issues of less and more importance in the coalition and that the aim is to discuss the more important ones.

The leaders of the coalition parties will meet and communicate with each other more often, Fico stated after the Coalition Council session. The three leaders – Fico, SNS chairman Andrej Danko and Most-Híd chairman Béla Bugár – took stock of the almost 12 months since the coalition came into being.

“We expressed respect for the existence of this coalition and for commitments arising from the government manifesto,” the PM said. “We’re espousing loyalty to what we signed up to in 2016. There’s no other way for Slovakia, it needs political stability and standard political approaches. This can only be guaranteed by the joint work of Smer, SNS and Most-Hid,” Fico concluded.

Fico went on to point to an agreement between the three parties on more sophisticated forms of collaboration. Echoing this, Danko said that the parties will liaise with each other more closely, including at the expert level. "We’ve learnt our lesson, we need to meet more often,” Danko said, as cited by TASR. “The meeting of the Coalition Council today [February 8] has pushed us forward, made a lot of things clearer. We want to carry on. We’re people made of flesh and bone... I myself continue to learn,” he concluded.

Bugár weighed in by saying that the outcome of the meeting showed that there is no state of crisis within the coalition. “Difficulties may arise every now and then, but what matters is to observe what’s on paper,” he pointed out. “We held a very open discussion on how to continue to work together in a way that prevents imbalance. Expert Coalition Council sessions will be held to discuss expert issues, making sure that everybody gets detailed information. The Coalition Council has determined our way of working ahead together,” Most-Híd chair summed up, according to TASR.

The leaders of the coalition parties agreed on regular sessions of the Coalition Council; the next one is to take place on February 14, Sme wrote.