Trnava-based carmaker PSA gets new head as of March

Previous general director goes to the carmaker's headquarters in Paris.

Stéphane Bonhommeau will take over as the new general director of the Trnava-based PSA Groupe Slovakia carmaker on March 1, replacing Rémi Girardon, company spokesperson Peter Švec informed. Girardon is leaving after two-and-a-half years at the helm to become the director of industrial strategy at the company's headquarters in Paris.

Bonhommeau, who was previously the director of the PSA Groupe’s plant in Sevelnord, France, has been in Trnava since the beginning of this week to familiarise himself with the plant.

Under the management of Girardon, the Trnava plant launched production of the new Citroën C3 model. 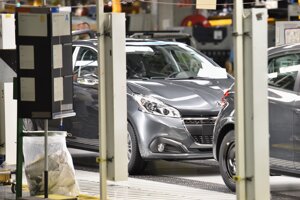 Girardon also pushed for the launch of the fourth, or weekend, work shift as of January 2017. In addition, logistical arrangements in car assembly and welding were carried out during his stint in Trnava, with output increasing to 60 vehicles per hour as a result. Also the Trnava production centre extended its portfolio of activities when the centre of accounting services for Germany, Switzerland and Austria moved here from Germany. This created almost 100 new work places for highly qualified experts in accounting and finances.