Who is the real populist?

There are two essential elements to defining a populist. In other words, true populists meet both criteria. 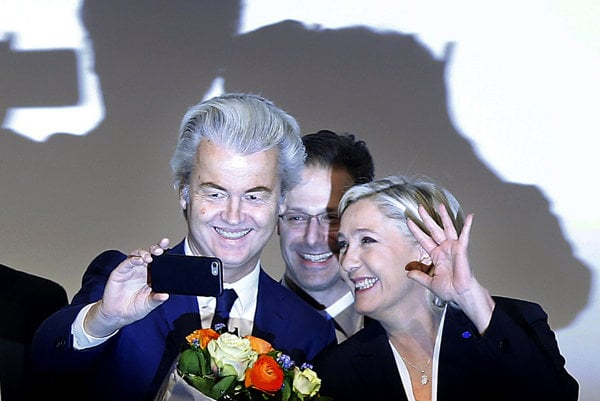 Far-right leader and candidate for next spring presidential elections Marine le Pen from France (r), and Dutch populist anti-Islam lawmaker Geert Wilders (l) stand together after their speeches during a meeting of European Nationalists in Koblenz, Germany, on January 21, 2017. (Source: AP/TASR)
Font size:A-|A+

Today’s word of the moment is “populism” – but there is not much agreement on what the word actually means.

The term is applied to politicians who have little in common. Marine Le Pen, Geert Wilders, Donald Trump and Viktor Orbán are called populists, but so are Bernie Sanders, Alexis Tsipras and Beppe Grillo. In Latin America, the late Venezuelan leftist Hugo Chavez was called a populist and so was Argentina’s military strongman Juan Perón.

A new book by the Princeton-based scholar Jan-Werner Müller, called “What is Populism?”, goes a long way to set the record straight. This is important, otherwise any politician that challenges the status quo is simply dismissed as populist. The danger is that populist becomes a label for, as Müller writes, any “successful politician one doesn’t like”.

Müller points to two essential elements to defining a populist. In other words, true populists meet both criteria.

First, they are anti-elite. Now, this is where most reasoning about populism usually stops. Somebody who criticises free trade agreements, bank bailouts or a political class that does not pay attention to the needs of low wage workers is often dismissed as populist. They are portrayed as being unreasonable and failing to understand how the world really works. Meanwhile anyone who supports that politician is dismissed as angry, afraid or frustrated – as if anger is never based in reason.

So while being anti-elite is a necessary characteristic of a populist, it is not sufficient. It must combine with a second attribute: populists are anti-pluralist. A populist leader claims that they alone can represent “the people”. Anyone they are running against is portrayed as illegitimate, part of a corrupt elite. Anyone who doesn't vote for them is not a real citizen.

A certain politician in this neighborhood has taken to calling anybody who questions him “anti-Slovak”, for example. Next door in Hungary, Mr Orbán held a referendum last year to reject EU refugee quotas, the result was invalid after not enough people turned out to vote. He called the result “outstanding” and promised to move forward with changing the constitution anyway – because the people who did vote, real people, Orbán supporters, backed his position.

As Müller puts it, populists claim is not “We are the 99 percent,” which is what the Occupy Wall Street protesters famously chanted. Populists claim “We are the 100 percent”. Anybody left out doesn't count, because they must not be a real Slovak, Hungarian or American.

The combination of these criteria is important for understanding populists once they office. They take over state institutions, engage in mass clientelism (corruption) to reward their friends (“true people”) and systematically attack civil society – all because they view themselves as the singular representation of the public will.

Some even have the gaul to do so based on receiving just 28 percent of the vote.