The Slovak president visited Kenya for the first time and highlighted the exchange of experiences between the two countries. 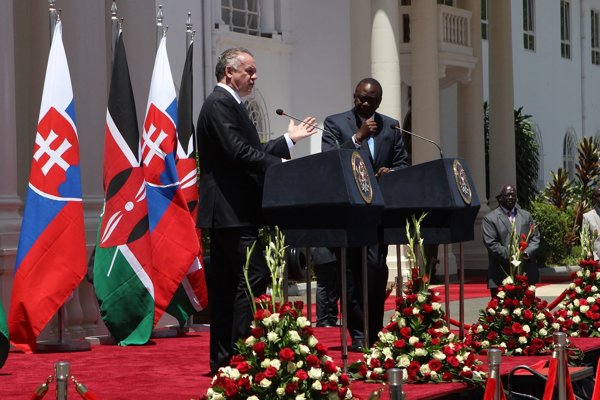 Over 100 development assistance projects have come into existence since Slovakia began to provide aid to Kenya in 2004 said Slovak President Andrej Kiska after meeting his Kenyan counterpart Uhuru Kenyatta and members of the country’s government in Nairobi on February 13.

It was his first official visit to the country.

“Several hundred [Slovak] volunteers have worked here,” Kiska said, as quoted by the TASR newswire. “Slovak projects have resulted in several thousand new jobs, and tens of thousands of farmers have had work as a result, and – much to my surprise – over 200,000 trees have been planted here thanks to Slovakia and Slovak projects.”

Slovakia’s aid to Kenya has amounted to more than €10 million over the past 12 years. The Slovak third sector was working in the country even before Slovak government assistance began. Kenya tops the list of countries on the receiving end of Slovak aid.

Bilateral ties based on exchange of experience

“Kenya as such is a highly stable pillar of this part of Africa,” Kiska said, as quoted by TASR. “It acts as a partner in the international fight against terrorism. Nairobi is home to many international institutions. Kenya is a pivot of economic development and, besides providing us with flowers, seafood and tea, somewhat surprisingly for me, it can also be a source of inspiration for Slovakia.”

Kiska and Kenyatta concurred that bilateral ties are based on exchanges of experience rather than on Slovakia counselling the country.

“As many as 85 percent of people have access to the internet, and mobile banking here is perhaps the best in the world,” the Slovak president continued. “This country is developing ... and dynamic development lies ahead for it.”

He went on to praise Kenya for being a stable partner for Slovakia and the EU.

Kiska’s talks with Kenyatta centred on trade, investment, the economy, education, job creation, health care and the fight against terrorism.

Kenyatta said that he is pleased with Kiska’s visit, adding that he believes that it will bolster bilateral ties. He went on to remark that Kenya was among the first countries to recognise Slovakia as an independent state in 1993, reported by TASR.

Kiska also went on a tour of the United Nations Office at Nairobi (UNON), accompanied by its Director-General Sahle-Work Zewde. Having planted a tree in UNON’s grounds, the Slovak president set off for a tour of a local tea farm.

The president also commented on the aid in the education field, saying that Kenya has launched an education reform but it is still in need of people with a good education.

“I believe that scholarships are one of the ways to go here,” Kiska said, as quoted by TASR. “I’d like to see a zero added to the current number of 50 scholarships, so that we can speak about 500 or even 1,000 scholarships.”

Forty-eight students, including six from Kenya, have received scholarships to attend Slovak universities this academic year, including Benson Kioko Kiamba, who hails from Nairobi and is enrolled in medical studies in Bratislava.

“He’s now in the third year, but he’s planning to go back and help his country,” Kiska said, as quoted by TASR. “These kinds of aid to people are the finest example not only of help, but also of building relations between countries.”

He noted that scholarships are a matter of funds and the willingness to bankroll such programmes, “because we do have places and foreign students at universities”, reported by TASR.

Slovakia as a modern country should be more active and provide more assistance, the president stressed.