MPs will continue in a special session on February 16. 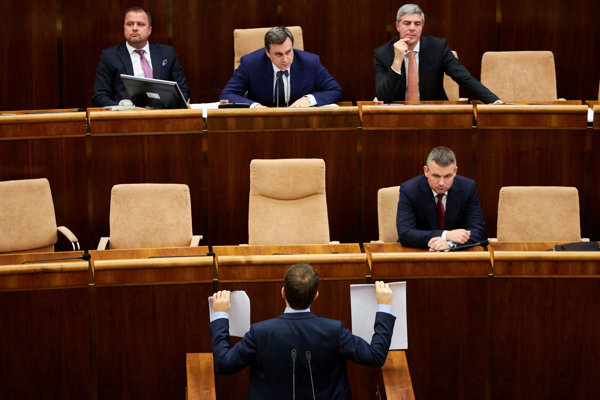 The special parliamentary session with a no-confidence motion in Prime Minister Robert Fico on the agenda, was interrupted shortly after it was opened on the afternoon of February 14. The reason was a picture of an old lady presented by Igor Matovič, leader of the opposition Ordinary People and Independent Personalities (OĽaNO-NOVA).

Matovič wanted to use the picture to demonstrate how the increased energy bills will affect her life. The Speaker of Parliament and chair of the coalition Slovak National Party (SNS) Andrej Danko, however, perceived it as a violation of the new rules of procedure, the Sme daily reported.

“I ask you to refrain from breaking the rules of procedure,” Danko told Matovič, as quoted by the TASR newswire, adding that he had brought prohibited material to the chamber. Subsequently, he asked the opposition MP to put it away.

Matovič, however, claimed that the photographs concerned were included in an official addendum to the opposition’s proposal for Fico’s dismissal.

“I know that you believe that you’ve banned this via the rules of procedure but the latter allows any MP to attach any visual documents as an addendum to an official proposal,” Matovič responded, as quoted by TASR. “So, these [photographs] are part of an official addendum to the proposal to dismiss the prime minister; they aren’t just visual materials. It’s my right [to present them].”

Danko however did not accept the arguments and interrupted the session, convening a parliamentary committee. After the meeting, he told journalists that the no-confidence motion in Fico will continue on February 16.

Meanwhile, Matovič was officially recorded as failing to attend the session and will face a disciplinary motion, as reported by TASR.

“I would have done it myself,” Bugár said, as quoted by TASR. “Some people aren’t able to work as required and aim to stir up arguments instead. The opposition needs to straighten out its own ranks or sort Matovič out. If Matovič’s spite and the negative energy surrounding him could be used towards lighting, parliament’s lights would be on for free all year round.”

Another deputy speaker of parliament, Martin Glváč of Smer, weighed in by saying that parliament’s rules of procedure have been made stricter partly in reaction to Matovič’s actions in the past.

“Rather than working for the people, it’s more convenient for him [Matovič] to put on shows,” Glváč said, as quoted by TASR.

The opposition, on the other hand, was critical. The opposition Freedom and Solidarity (SaS) party said that its MPs are ready to hold expert deliberations on “why the citizens of Slovakia received such steep energy bills and who’s liable for this”.

“We regret that no expert discussion could take place today [Tuesday] but we see no point in becoming enmeshed in a personal dispute over the interpretation of the rules of procedure,” the party wrote in a statement, as quoted by TASR, pledging that it was ready to engage in a constructive debate on February 14.

The party stressed that what it cares about most is “to resolve the abnormal situation that’s befallen people due to the greed of the sitting government and to stop such things from recurring in the future”, as reported by TASR.

Meanwhile, Matovič pointed to the fact that Glváč registered Danko in the chamber on February 14. He urged both politicians to resign.

“Danko and Glváč committed fraud when Mr Glváč registered on behalf of Danko,” Matovič told a press conference, as quoted by TASR. “Subsequently, when they found out what had happened, they didn’t come clean but let the session continue.”

This means, in Matovič’s opintion, an egregious violation of the law was committed in parliament by two of its most senior representatives.

“They committed fraud and then failed to admit it,” Matovič added, playing a video recording of the vote as evidence.

The incident occurred during MPs’ registration for the February 14 session. Even though Danko was not present in the chamber, he was registered with his card as being present during the registration process. On the other hand, Glváč, who was in the chamber at that time, was listed as absent, so it appears that he may have used Danko’s card instead of his own.

The OLĽNO-NOVA leader conceded that a genuine mistake might have occurred, but he resents the fact that Danko and Glváč knew about this but opted to hush it up. The parliamentary rules of procedure do not allow lawmakers to register their colleagues or vote on their behalf.

If Danko and Glváč do not relinquish their seats, OĽaNO-NOVA will consider taking further action, TASR reported.

The communications director for the Parliament Office, Zuzana Čižmáriková, however, responded that Danko has not violated any law as he registered himself with his own card that had been lying on his desk, TASR reported.