The street of national monuments

In the past, the area between the modern-day Slavín monument and Palisády neighbourhood was composed of vast vineyards. 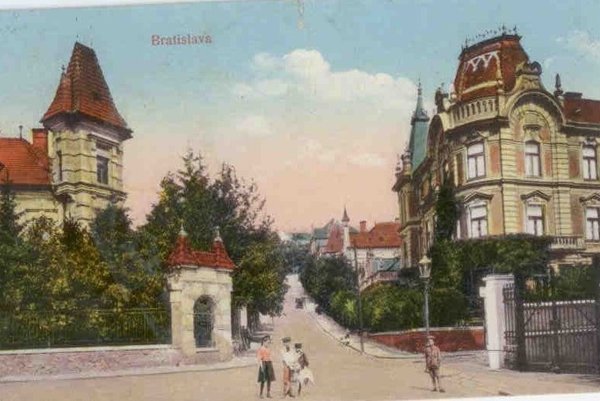 The decline of viniculture in the second half of the 19th century, caused by the devastating grape phylloxera insect epidemic and the increased number of wealthy people, totally changed the face of this region of Bratislava. Where grapes and other fruit were harvested changed relatively quickly to building sites and, as early as in 1894, urban designs show a continuously built-up area here.

On the climbing slopes of the Carpathians, Kuzmány Street appeared, on which several rich citizens built their villas. Nine national cultural monuments in this street show that these citizens had refined taste.

Let us look more closely at the villa of doctor Béla Michaelis, with a picturesque small turret on the left of the postcard. The doctor had it built in 1879, in a neo-renaissance style. He probably had no problems financing the construction, as he was the main doctor of the general staff of the army. Thus, one of the most valuable residential buildings of those times on Slovak territory appeared in the Neustift, or New Residential Area.

The valuable building was inhabited also by valuable people. After the Michaelises, later inhabitants included an Orthodox pope, a wood wholesaler, and in 1949, famous Slovak actor Andy Hryc was born here.

The neighbourhood of villas on Kuzmány Street stands almost intact even now, and it is undoubtedly worth visiting.