E-cars get the green light

In Slovakia, 168 electric cars sold in 2016. After the government introduced a subsidy, there have already been 97 applications so far in 2017. 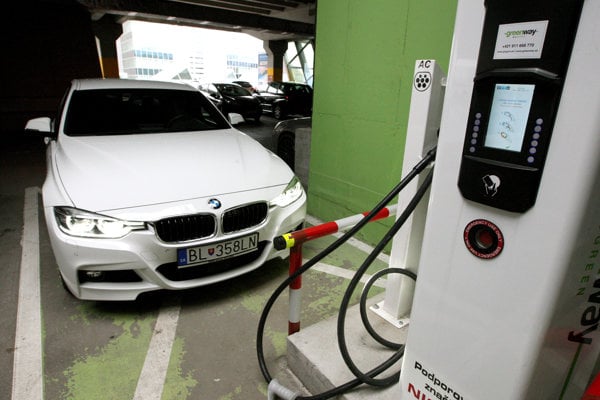 While in western Europe there are ever more new electric vehicles on the roads, Slovak consumers are somewhat slower to adapt to the trend. A significant change seems to be happening now, however, with a new state subsidy.

By mid-November 2016, the Economy Ministry introduced a state funding programme to support purchases of electric cars in Slovakia. The programme responds mainly to the effort of European authorities to expand alternative fuels in all EU countries. Though high initial investment, limited range and the small number of charging points may likely keep electric cars a matter of image, automotive experts consider the support to be a major step in creation of a basic electric fleet that will help in shaping the views of a wider audience for this kind of mobility.

“It is a necessary step that all significant economies had to take when they wanted to ensure the development of alternative mobility,” Ján Pribula, general secretary of the Slovak Automotive Industry Association (ZAP), told The Slovak Spectator.

Those interested in buying an electric car can ask for a state subsidy of €5,000 if they are looking to purchase a vehicle with pure electric drive (BEV), or for €3,000 if they are buying a plug-in hybrid car (PHEV). The overall budget of the programme amounts to €5.2 million and the subsidy applies to all personal and light utility electric vehicles weighing less than 3.5 tonnes that their owners register in Slovakia.

The ministry prepared the subsidy programme within the transposition of the Directive of the European Parliament and of the Council on the deployment of alternative fuels infrastructure. The programme’s budget comes from resources from the defunct Recycling Fund and ZAP contribution, the Energia.sk website, dedicated to energy issues, reported.

The new subsidy has already contributed to greater interest in electric vehicles. While in total 12 owners of electric cars received funds from the aid in 2016, the ministry currently registers 97 applications for allocation of funds.

So far, up to 25 subjects have asked for the subsidy to purchase light utility vehicles. Electric cars mean an economic option for several companies whose cars drive routes up to 150 kilometres, ZAP vice-president Pavol Prepiak said, as quoted by Energia.sk. 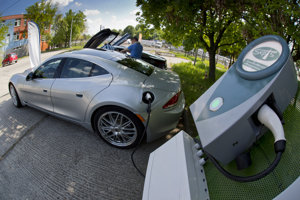 Though this is the first programme of its kind in Slovakia, the interest of people in electric cars has been rising year-on-year even before last year. In 2013, the Economy Ministry recorded only 19 electric cars sold, while in 2014 the number went up to 65 and in 2015 to 69. In 2016, 168 electric cars were sold.

“The development of interest in support of BEV and PHEV cars keeps us optimistic that these numbers will increase again in 2017,” Economy Ministry’s spokesman Maroš Stano told The Slovak Spectator.

Entrepreneurs, however, question the advisability of the support due to the related resignation of the government in other policy objectives. Specifically, the government gives €3,000 to citizens with above-standard income, if they buy an electric vehicle from Tesla Motors for €70,000, said Ján Oravec, chair of the Entrepreneurs Association of Slovakia (ZPS).

“At the same time, it gives nothing to citizens with average or under-average income whose only option remains to buy cars with classic engines,” Oravec told The Slovak Spectator.

Electric cars are marketed to the public as vehicles with no or little emissions. But people should take into account also the methods of electricity production, according to Oravec. If it is made from lignite, electric car emissions can be higher than emissions of cars with conventional gasoline or diesel engines, he noted.

In terms of advantages, electric vehicles are quiet, do not produce emissions, respond very flexibly and provide maximum comfort, said Pribula. They do not have problems entering low-emission areas that the biggest, most emission-loaded, European cities are gradually introducing in their centres.

However, the current state of technological progress does not yet allow use of the majority of electric models offered on the market at such a level as to which customers are used to from traditional cars, Stano said.

“Such vehicles are currently more suitable for shorter routes with breaks for recharging,” Stano said.

Pribula explained that an electric car can satisfy customers who need it as a second vehicle for family, sending parcels or fulfilling operational tasks of self-government authorities. These vehicles also go to multinational corporations which operate within a policy of respecting the environment and also apply these principles in their fleet policy.

Electric vehicles do not have a strong market share in Slovakia yet due to the high price sensitivity of Slovak consumers. The first decisive factor is price, followed by the absence of additional stimuli in taxation and charging of vehicle operation during its entire lifetime, according to Pribula.

Oravec pointed out that subsidies do, in principle, alter the negative ratio of prices of electric cars and hybrids as compared to other alternatives. Thus, further commercial development should improve their economic and operational efficiency, he said.

“Higher efficiency will mean lower prices and higher attractiveness in comparison with other alternatives,” Oravec said.

While the ministry pointed to other constraints such as limited range and lack of infrastructure, ZAP would welcome a systematic approach in reducing transport emissions. Countries with better development of alternative propulsion dispose of systems of support measures for renewal of car fleets with low-emission vehicles, said Pribula.

“Though Slovak legislation contains several relief measures for owners of BEV and PHEV vehicles, a comprehensive approach which would include low-emission vehicles as a whole is absent,” Pribula said.

Currently, the EU is pushing member countries to reduce emissions, so they carry out a number of measures to promote electric mobility. Most common are direct subsidies for purchase of vehicles, financing projects and tax breaks, according to the ministry’s draft of the National Policy Framework for Alternative Fuels Market Development.

Other measures include construction of reserved parking spaces and road lanes, educational campaigns and cooperation of countries in developing national policies for promotion of clean mobility.

To improve the situation in Slovakia, Oravec suggests replacing the support for purchasing electric vehicles with promotion of construction of essential infrastructure including fast-charging stations for electric motors.

ZAP recommends overall assessment of taxation of vehicles’ operation and an onward motivational system which would encourage customers to rebuild their fleets to comprise more low or zero emission vehicles. Self-government authorities should also have their share on promotion of electromobility, said Pribula