Scarce promotion among primary school pupils and their parents, and insufficient financial motivation for companies are among the most cited reasons of why the system struggles. 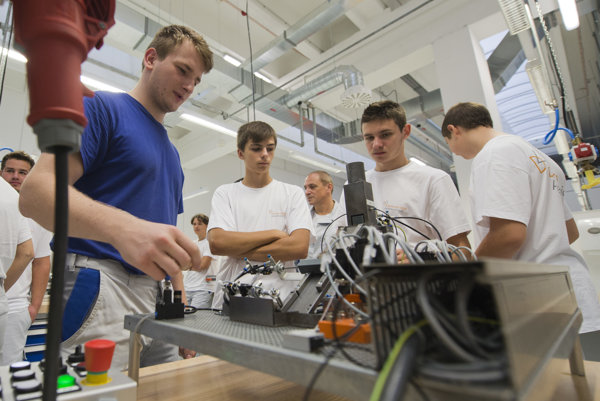 When employers complained about the shortage of qualified labour force on the market, dual education was introduced with the aim to become one of the remedies for their problem. Expectations were high during the preparations, but now that the system has been launched, pupils and employers alike seem to be lacking interest in taking part.

Scarce promotion among primary school pupils and their parents, and insufficient financial motivation for companies are among the most cited reasons of why the system struggles.

“The first year of dual education in Slovakia has shown that the biggest problem is to attract primary school pupils and persuade their parents to let them join the system,” Jaroslav Holeček, president of the Employers’ Board for the Dual Education System and executive vice-president of the Automotive Industry Association, told The Slovak Spectator.

Currently, only about one-tenth of the 134,000 pupils at secondary schools participate in the scheme. Statistics show that 1,121 pupils started training in 142 companies altogether in September 2016.

The number is more than double than the total in the programme’s first school year, 2015-2016, when 92 employers created a total of 1,438 positions, but only 469 of them were actually filled.

The State Institute of Vocational Education (ŠIOV) plans to increase the number of participating pupils fivefold by 2020.

Up to 75 percent of secondary school graduates do not work in their field of study. That means only 4,000 graduates find a job they studied for. This, however, is insufficient, as some 41,000 qualified workers retired in 2016, while their number should increase to 46,000 annually as of 2024.

As a result, there is a deficit of more than 34,000 graduates every year, the institute’s head Michal Bartók told a December 2016 press conference, as reported by the TASR newswire.

The representatives of employers agree that dual education can solve these problems. Moreover, dual education is a tool to reduce the unemployment rate of young people, which remains a priority for many European Union countries, said Mária Berithová, head of the Slovak-Austrian Chamber of Commerce.

“The dual education system is one of the suitable solutions as pupils acquire skills necessary for the labour market and the companies garner an appropriate labour force,” Berithová told The Slovak Spectator.

She stresses the necessity to connect the education system and companies in a way that they train students for specialisations currently lacking on the labour market.

This, however, may be a problem as the current structure of specialisations and also the structure of some schools is off target, says Holeček.

“Unfortunately, we have specialisations that have disappeared from schools over the past 25 years, but we need them badly,” he added. “We also do not have enough students in specialisations lacking on the labour market.”

Another frequently cited reason for low interest among pupils is insufficient promotion among young people and their parents. One of the reasons for this is the lack of career counselling at secondary schools, employers agree. Some schools refuse to participate in the system altogether.

“Companies often witness the unwillingness of vocational schools to sign agreements with them,” Viliam Gonda of the Slovak Chamber of Commerce and Industry told The Slovak Spectator.

This may follow from the fact that they receive a lower contribution for students attending dual education. Moreover, schools need to dismiss some of their teachers and have to reduce the number of theoretical lectures, the Sme daily reported.

“Schools need to be enabled and encouraged to go dual,” Guido Glania from the German-Slovak Chamber of Commerce and Industry told The Slovak Spectator. “Financial support and know-how are essential to make them motivated and capable partners for companies.”

Some schools, however, are reluctant to change their ways.

“It is easier for schools to have their own master of vocational education rather than communicate with companies within dual education,” Holeček added.

Additional problems include red tape and poor financial support for companies. Currently, participating companies are entitled to tax relief of up to €3,200 per student for whom they provide practical training of more than 400 hours annually.

Moreover, every company seeking to go dual needs to pass a demanding registration process and obtain a certificate confirming they are able to provide the necessary education on their premises. Employers first have to submit an application to the professional organisations that oversee the process in individual sectors, which then tests its abilities to train pupils. Only after passing this process they can sign agreements with schools.

This is also why small and medium-sized companies (SMEs) are not motivated to participate in the system, representatives of employers agree.

“Smaller companies fear the initial investment needed to start dual vocational training, i.e. the preparation of in-company instructors and the provision of equipment,” Glania said, adding they are also afraid the pupils will leave for bigger firms which can offer them higher salaries.

Moreover, SMEs lack the educational centres that would secure the practical training of pupils within the system, said Gonda.

“However, the more companies join the dual system the more SMEs will see the benefits and overcome their reservations,” Glania opines.

Besides increasing the financial motivation of companies and reducing the administrative burden, the state may motivate SMEs to join the system by establishing some kind of methodology support, Berithová and Gonda agree.

Following complaints from the business community, the Education Ministry organised several meetings to collect their comments and proposals. It plans to amend the law on vocational training, promising to establish a system of career counselling and remove administrative obstacles employers face.

The new rules may come into force on September 1, 2018, the ministry told The Slovak Spectator.

Moreover, ŠIOV plans to prepare a national project, set to run through 2020, which will be funded from the EU funds.

Part of it will consist of the establishment of eight so-called dual points in every self-governing region where parents, employers and schools will find and deal with all documents necessary for joining the system. ŠIOV expects that 12,000 pupils will participate in dual education thanks to the project. Moreover, it plans to sign 1,450 agreements with secondary vocational schools and train 700 instructors, TASR wrote.

Representatives of employers, however, also propose other measures to make the system more attractive, mostly calling for direct financial motivation for employers, simplifying the administrative process, harmonising the offer of specialisations with labour market needs, and better promotion among pupils.

“We expect that dual education will make a big contribution, but we will be able to evaluate it only after some years when we see how the graduates place in the labour market,” Roman Conorto of the Federation of Employers’ Associations said.

Want to go dual? Make sure to prepare carefully

The Slovak Spectator asked some of the companies who already participatein dual education to give two reco mmendations for firms who are thinking about joining the system.

Monika Mihoková, head of the centreof education at T-Systems Slovakia

Every firm interested in taking part in dual education should first of all ask itself whether it is willing to invest into education, meaning not only finances, but also human resources (lecturers, instructors,teachers and other staff), tools, spaces and, first of all, time. It is a long-term investment that only pays off after several years. This step is important both for the company and the school. The second step is very good planning and the preparation of the whole education programme in close collaboration with schools. Both participants need to clearly define their aim, specific expectations and outcome, as well as particular responsibilities, duties and powers in order to avoid misunderstandings.

The selection of a responsible partner, represented by a secondary vocational school, is the crucial factor for successful entry into this system. The secondary school needs to meet the company’s idea of its future employees’ profile, in terms of theoretical preparation. It is important that they also understand each other in terms of benefits,strong sides of dual education and, of course, in the sense of this cooperation. Companies planning to train more than 10 pupils within the dual education system would do well to pick one person to deal with this administratively difficult agenda full-time. The reason is that entry into the dual education, but also subsequent activities pertaining to the system’s implementation, organisation and promotion create time and administrative demands.

A big advantage is when companies have previous experience with the vocational training of pupils at their premises. At Kia Motors Slovakia, we had already gathered valuable experience during a year-long cooperation with secondary schools in Žilina Region, thanks to which the launch of dual education was smoother and communication with our partner school, the supervisor of vocational training and pupils was much more effective. We recommend that companies who want to join dual education to pick a coordinator/chief instructor forthe implementation of the project, who will devotetheir full attention to this agenda. Especially if more students attend it, selecting a responsible employee is beneficial for coordination of activities not only within the company, but also towards its partners.