Mečiar appeared in public, speaking up against amnesties

The idea of cancelling the so-called Mečiar amnesties got so high-profile and much discussed that it provoked their author to make a public appearance after many years. 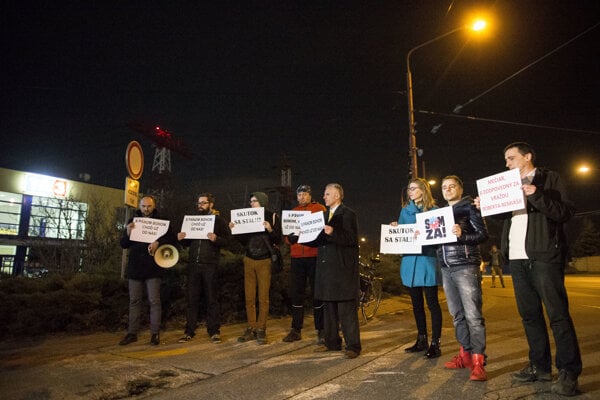 Protests against Vladimír Mečiar and his amensties, in front of the TA3 TV channel. (Source: Sme - Gabriel Kuchta)
Font size:A-|A+

Long-time chairman of the HZDS party and former prime minister Vladimír Mečiar had a discussion on the TV political show Topic of the Day, on news TV channel TA3 on the evening of March 7, with the head of the coalition party Most-Híd, Bela Bugar.

The TV channel decided on Bugár as the ex-PM’s opponent, since he is one of a few current politicians who was in parliament when Mečiar granted his amnesties.

The last time the HZDS chairman was seen in public was at the funeral of his long-time party colleague Marián Augustín Huska last year, the Sme daily wrote. However, he refused to discuss political topics.

The announced talk show attracted dozens of people who felt the urge to show discontent with what happened back in the 1990s and share grievances against Mečiar. Police were also summoned – as a preventive measure – but did not have to intervene. Some opposition MPs also appeared. Listening to the debate on mobile phones, people shook their heads and called him a liar.

While Bugár said he would insist on the cancellation of the amnesties dating back to the late 1990s, Mečiar, who through them definitively prevented any investigation and prosecution of all crimes connected with the abduction of the son of then president Michal Kováč to Austria, was clam and insisted on not abolishing them. “The Constitutional Court said they were non-cancellable and parliament has no competence to cancel amnesties,” Mečiar said, as quoted by Sme. He added they could end up at the European Court of Justice – but he would not file the motion. “I do not have to; there are people here who mind the legal status of his country,” he explained. Mečiar also attacked the witness of the abduction, Oskar Fegyveres, for receving money for his part in the act; as well as the late president Michal Kováč who allegedly knew about what was going to happen in advance.

Bugár opposed him, opining that there is a way to cancel them. After the debate, Bugár summed it up: “I know him, Mečiar has not changed. But it made sense [to arrange for the debate], as at least people who did not live then got a bit of an overview of what happened at that time.” He added he would try to persuade his coalition partners to support abolishing the amnesties: “Ten votes are enough, and we have the necessary 90,” Bugár said. “I will keep persuading them.”