In its efforts to introduce musical pieces never performed before, the Slovak National Theatre (SND) has recently offered the Triptych by Giaccomo Puccini. 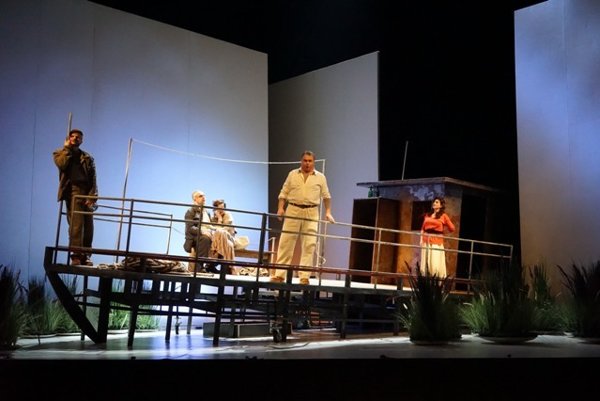 It is composed of three one-act operas, of which the first one is being premiered for a historic first time – not just in the SND, but also in Slovakia.

“The opera team is trying to fill in the blank spots on the dramaturgical map,” art director of SND’s opera section, Slavomír Jakubek, said. “We are a relatively young culture – SND is less than one hundred years old – so it is our duty to handle the great operatic works which have never been played here…. And with this approach, we have also chosen Puccini’s Triptych, although two of the three parts have already resounded in Bratislava: the one-act Il Tabarro and Gianni Schicchi. However, as a complete triptych, this has never been played – neither in Bratislava, nor in Slovakia; so this is the Slovak premiere of the complete staging of this exceptional triptych,” he summed up.

How the Triptych works

All three parts of the opera are individual, complete works, and can be performed separately, although usually two or all three of them are combined. The opera that has been chosen as the initial part in the SND, Suor Angelica / Sister Angelica, is an intimate, spiritual almost mono-dramatic story, with a toned-down atmosphere and a single – but very strong – dramatic scene.

Angelica was sent to a cloister by her noble after she bore an extramarital child. The idea of her son living a nice life and maybe one day bonding with her gives her the strength to survive behind the gloomy walls. However, when her aunt comes after years of rejection by the family, the prospects become even gloomier… 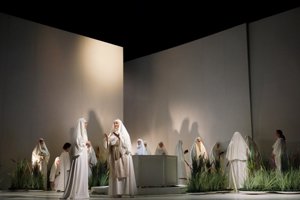 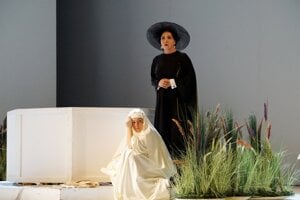 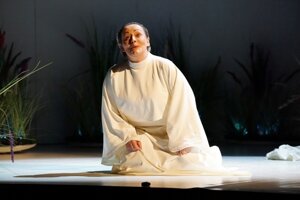 The middle piece, Il Tabarro / The Cloak, is closest of the three to the classical verism-style opera, with a strong dramatic storyline, escalated crisis of relationship and a catharsis that mars all hopes, emotions and outlook of a change for better.

The marriage of Michele, a tug-boat owner, and his wife Lauretta is hapless, especially after they lost their single child. Their lack of communication that burdens especially the wife ensues in her feelings focusing on the poor employee of her husband, Luigi, with whom she shares memories of a happier childhood and also hopes for a better, common, future. However, by accident – if ever anything like that has existed – all her aspirations come to nothing in the most horrible way possible. 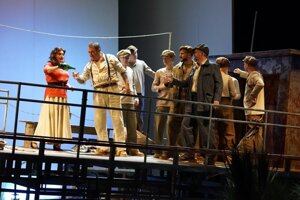 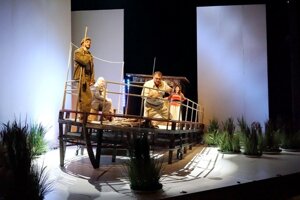 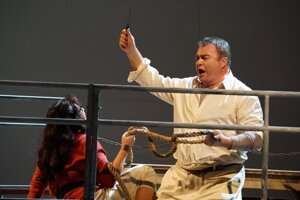 The third piece, Gianni Schicchi, is based on a story from Dante’s great work, Inferno. The libretto author Giovacchino Forzano (who also wrote Suor Angelica) developed it into a fine sketch about the death of a rich burgher whose heirs fight for the inheritance and even resort to a trick that ultimately turns against them, as the sly villager Gianni Schicchi outwits them. Puccini made a buffa (comedy) of this libretto that is rare in his work but shows the composer’s potential in this genre. The bitterly ironic comedy shows the funnier side – with black humour – of death.

The middle part, Il Tabarro, was written as the first, and by a different author, Giuseppe Adami.

Visitors of the Bratislava theatre can enjoy the different character of each of the works: the fine, toned-down feeling evoked by Suor Angelica, with a dramatic scene between Angelica and the Countess that sends chills down one’s spine; the quasi-romantic atmosphere of a boat on the Seine in Il Tabarro that, however, hides skeletons in the closet, including the melodic duets of potential lovers and/or married couple. Gianni Schicchi sends, rather than chills or romantic feelings, fits of laughter among the audience. 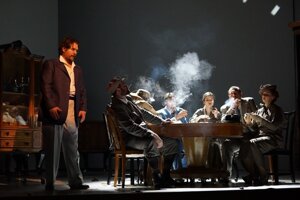 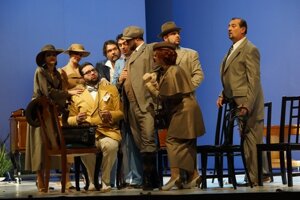 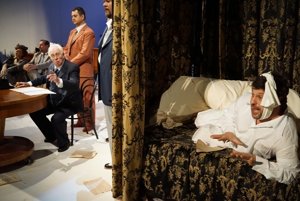 The connecting phenomenon of Triptych is, apart from the stage design, the death in all its forms and perceptions, from an escape from dire straits, through a drama in relations, to a family event that starts funny, parodic behaviour. Also, a child appears in all three parts - in one as a fantasy symbol, in another as the spirit of a deceased child, and in the third as a live boy, singing and messing around in the heavy, pretentious world of adults.

As the theatre-makers wanted to stress the universal, timeless character of Puccini’s stories, the stage – the work of Pavel Borák – is non-descript and neutral, although visually positive; as are the costumes by Peter Čanecký. In each of the works, something is added to characterise it: light-bringing fountain in Sister Angelcia, the boat on Paris embankment in Il Tabarro, and the trendy, period antique-style furniture – that becomes the core of the fight among relatives – in Gianni Schicchi. The costumes are not individualised and timeless, too (it cannot be specified to which order Sister Angelika belongs), save for the third part, where they are obviously taken rather from the beginning of the 20th century than from the early renaissance, as originally meant.

“We have not left out a single note from the score,” Rastislav Štúr, the musical director and conductor – alternating with Martin Leginus – said at a press conference. He stressed how difficult it is to conduct all three of them, with the order being suited rather for viewers than for the performers, as Gianni Schicchi, the last piece, is the most difficult. Štúr said that SND is playing the last version of this piece whose world premiere took place in 1918, in the Metropolitan opera in New York, and in January 1919 in Rome, Italy.

Triptych, staged in co-production with the National Moravian-Silesian Theatre in Ostrava, Czech Republic, is directed by head of the SND’s Drama Section Roman Polák – who has seemed to divert more often into the realm of music recently. and to enjoy especially the comical operatic works, which the audiences feel and react to.