Coalition agrees on a solution for scrapping Mečiar’s amnesties

It will unveil details on Wednesday, March 15. 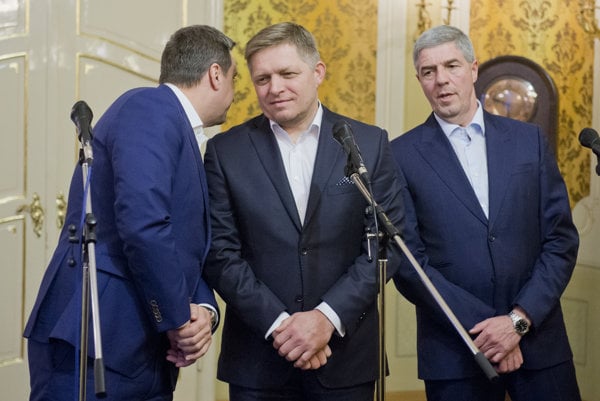 The coalition will submit its own constitutional solution to revoke Vladimir Mečiar’s amnesties at the cabinet session to be held on Wednesday, March 15, Prime Minister Robert Fico (Smer) said after the Coalition Council session on March 13.

“The governing coalition has decided to tackle the revocation of Mečiar's amnesties in a constitutional manner,” said Fico as cited by the TASR newswire adding that the coalition wants the amnesties scrapped. “I would expect the opposition to show a constructive solution as well.”

Fico claimed that the ruling coalition is prepared to vote for abrogating the amnesties after they first make a relevant amendment to the Slovak Constitution.

The agreed solution calls for parliament and the Constitutional Court to be invested with powers that will enable them to act, thus opening the door for lawmakers to annul the amnesties. The coalition will release details of the plan on Wednesday, with legal experts summoned at the moment to work on the motion. Also to be revoked is the amnesty of former president Michal Kováč used to grant legal pardon to his son, who was suspected of economic criminal activities in the Technopol case.

“We want to do this in a legally clean way,” said Speaker of Parliament Andrej Danko (SNS), who rejected the notion that he has taken advantage of the issue for politicking.

Danko maintains that the coalition is attempting to arrive at a compromise, a sentiment also echoed by Most-Híd chair Béla Bugár, who voiced his full satisfaction with the agreement.

“We found a compromise that will enable us to scrap Mečiar’s amnesties,” said Bugár. “Parliament can take action in accordance with the constitution and we can vote for the revocation at the next session. We are nearing the conclusion. If no politicking ensues, the whole of parliament can lend its support to the abrogation of these amnesties.”

Fico stated that the plan championed by the opposition does not represent a constitutional approach for scrapping the amnesties.

Danko hopes that the coalition-sponsored motion will also secure support from President Andrej Kiska and the opposition.

Mečiar’s amnesties relate both to the 1995 kidnapping of Michal Kováč Jr. and the murder in 1996 of Robert Remiáš, who served as a contact for a key witness of the abduction.