Although Sagan ended up 113th due to a potential collision with a pedestrian and a dog, he won the points classification. 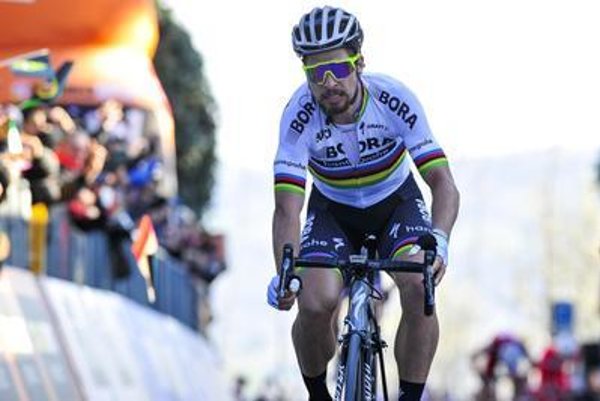 Sagan cylcing to his victory in an earleir, March 12, stage; overall, he ended 47th in the Tirreno-Adriatico cycling race. (Source: TASR)
Font size:A-|A+

The stage taking place on March 14 was won by Australian Rohan Dennis, while Columbian Nairo Quintana of the Movistar team won the overall race, which is included in the World Tour series.

Slovak cyclist Peter Sagan was lucky in an unfortunate situation in the Benedetto del Tronto time trial, a mere 10 kilometres long. The leader of the Bora-Hansgrohe team had to brake violently after he spotted a woman with a dog on a pedestrian crossing. He almost crashed into onlookers lining the road, the SITA newswire wrote, but spotted a gap in the crowd which his handling skills allowed him to take advantage of. Ultimately, all ended well, but the incident cost Sagan time, and ultimately, he was classified as 113th, with a loss of 1.19 minutes compared to the winner, Dennis.

Sagan wrote that he was a dog-lover too but he appealed on Twitter to other dog-lovers to be careful with their dogs, so that cyclists are safe as well. Later, he commented for the Eurosport, that he noticed them quite late and could not brake sufficiently. Fortunately, nothing happened to him or anybody else. He added that nothing serious happened and that he was already looking forward to the Saturday race, Miláno - San Remo.

Peter Sagan has won two stages of the Tirreno race this year, including the March 12 finish in Fermo, where he beat a whole bunch of favourites. He also defended the red jersey of the points classification winner.