It is hard to say how the current geopolitical situation will impact automotive industry contractors, but for now their situation is good. 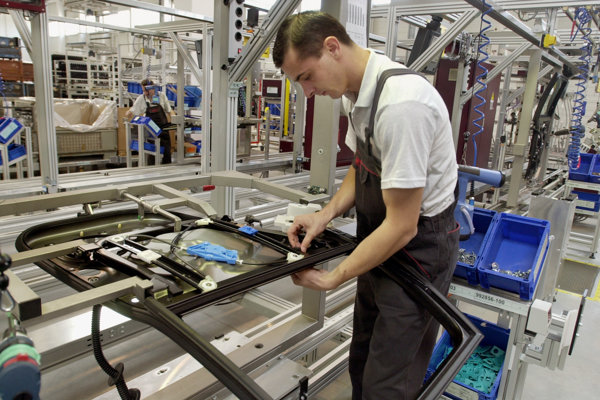 Brose Slovakia also has a plant in the village of Lozorno, close to Bratislava. (Source: TASR)
Font size:A-|A+

Certain car brands driving on the roads in America, China or India may contain components manufactured in Slovakia. This is possible due to extensive supply chains, parts of which are in Slovakia, which has become home to many international automotive contractors in recent years. Yet firms of Slovak origin are not lagging behind, though currently, their number is not so high.

The suppliers situated in Slovakia export about 60 percent of their total production abroad.

“If they did not produce quality products, foreign customers would not buy them,” Jaroslav Holeček, vice-president of the Slovak Automotive Industry Association (ZAP), told The Slovak Spectator.

Not only subsidiaries of multinational companies, but also local suppliers have a strong position on foreign markets, adds Martin Jesný, analyst of the Slovak Automotive and Technology Forecast Institute.

“Their number, however, is relatively low,” he told The Slovak Spectator, adding that the private industrial sector started developing in the country only after the change of the political regime in 1989. “But these Slovak firms have good results and a really good reputation in the field.”

Though suppliers export to the American and Asian markets, most of the manufactured components end up in Europe. Holeček suspects that up to 80 percent of products are supplied to European automotive companies.

The suppliers have a strong position especially in neighbouring countries, such as the Czech Republic, where the Slovakia-based carmakers have their twin factories, and Hungary, but also Germany which has a traditionally strong automotive sector, Jesný added.

Components sent across the world

ZF Slovakia, whose plants are situated in Trnava and Levice (Nitra Region), exports about 99 percent of its production, which includes clutches and dual-mass flywheels, torque converters, conventional shock absorbers, and suspension components, such as ball joints and stabilisers, for various types of vehicles.

Additionally, the company Brose Slovakia, which has plants in Lozorno (close to Bratislava) and Prievidza (Trenčín Region), sends about 85 percent of its production abroad, mostly to markets in Germany, Great Britain, Sweden, Poland, but also to China as well as to other Brose locations in Mexico, South Korea and Belgium, the company’s authorised representative Axel Mallener told The Slovak Spectator.

Brose Slovakia manufactures window regulators, door modules and power liftgate systems, which can be found mostly in the brands produced within the Volkswagen group, but also Opel, BMW and Ford.

“We do not develop any products in Slovakia yet, although we will do so in Prievidza soon,” Mallener said.

The Ilava-based Hanon Systems Slovakia supplies more than half of its products to Slovak carmakers, with the rest being exported abroad. It focuses on climate control products, such as heating, ventilation and air conditioning units (HVAC), cooling modules and various types of heat exchangers for leading global vehicle manufacturers, said the company’s spokesperson Veronika Prudilová.

An ideal location for our business in terms of its proximity to our customers, suppliers and business partners,” she told The Slovak Spectator.

Modernisation is a challenge

Back in 2014, suppliers, similarly to carmakers, had to slightly change their focus after the EU and the US imposed sanctions on Russia for annexing Crimea. They, however, managed the situation and replaced the market with others in Europe and across the world.

“So the decline was not so significant to impact them,” Holeček said.

Jesný agrees, saying that currently suppliers in the central European region have sufficient orders from carmakers.

There are, however, other challenges the companies may face in the future. One of them is the demand for highly competitive production.

“This means they should keep the high technical quality of the components and also produce them more effectively,” Jesný said, explaining that this requires the modernisation of production and use of up-to-date technologies and automated processes within the Industry 4.0 project.

This will be very important especially due to the fact that the call for new and more innovative products will intensify in the future and there will be pressure on firms to produce them quickly, Jesný added.

Suppliers addressed by The Slovak Spectator, however, say that they are ready to tackle the potential problems, pointing to their position in the global markets. Brose also points to its technically reliable supply base and a well-developed infrastructure; while ZF claims it offers intelligent solutions to the current challenges facing the sector, including the efficiency, safety and use of electric and hybrid drive. Brose says that to be able to produce for foreign markets on a large scale in Slovakia, two conditions have to be met here first: a technically reliable supply base and a well-developed infrastructure.

Another important factor will be the availability of the labour force that will be impacted by the access of people to the Slovak labour market. Jesný predicts it will be necessary to hire people from abroad to make up for the lack of qualified workers. Currently, companies hire workers from Serbia and Bulgaria, but it is possible that also the number of Ukrainians will increase in the future, he adds.

Trump not to have an impact

Holeček says it is hard to say how external factors, like Brexit or the election of Donald Trump who wants to lure back US companies with lower taxes and less red tape, will impact suppliers.

“The promises differ from concrete actions,” he added.

Jesný opines that Trump’s victory in the US presidential race will not have any direct impact on the suppliers established in Slovakia as the suppliers are often situated close to the place where the cars are finalised.

“If these companies are expected to be competitive and supply products to carmakers in the region, they should produce in the region,” he explained.

There is, however, a question whether the US will not create any obstacles for exports of European carmakers to its market. For example, luxurious SUV cars produced by Volkswagen are quite popular in the US. If their sale is somehow disadvantaged, not only the carmaker, but also its suppliers will be affected, Jesný explained.