A memory of woods

Some time at the end of the 1920s, Czech painter Václav Malý climbed the steep slope of Čebrať Hill, and from there he painted a panoramic picture of the town Ružomberok. 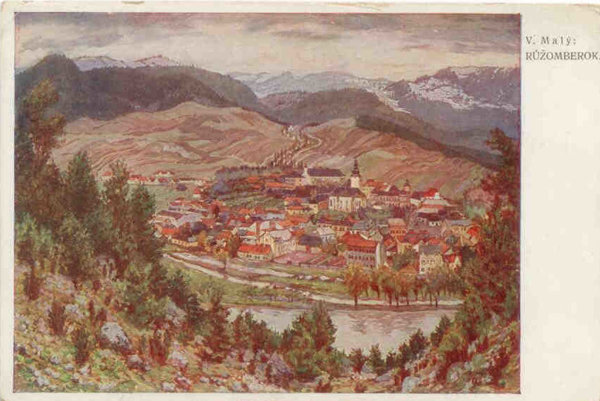 Most of it fit on the canvas, and the painter also managed to capture a huge part of the surrounding landscape. These days, he would probably not manage to do so, as the town has grown considerably in the meantime.

Just like Ružomberok itself has changed in the course of the years, so has the nearby land as can be clearly seen in this postcard.Of the once densely wooded region of Liptov, forests remained only at higher altitudes; at lower altitudes, trees were cut somewhat extensively as early as the Middle Ages. The ever more numerous population needed farmland, and charcoal was burnt in large amounts. And speaking of Liptov, one should also not forget the intense gold, silver and copper mining. All this has contributed to the overall look of the landscape.

The alarming depletion of woods was acknowledged in Ružomberok long ago. To give the woods time to recover, the town used to stop timber falling completely from time to time. In 1739, the mine prefect from the nearby town of Banská Bystrica made the first statute to protect the Ružomberok forests, and damage to the forest began to be strictly punished.

As the forests diminished, the wolves disappeared from the Liptov landscape. These predators were then considered a nuisance animals and people actively contributed to their extinction. Another once common inhabitant of Liptov forests, elk, also vanished from the area. In the meantime, wolves – again, with the contribution of humans – returned here; elk, however, have not returned, if we do not count the single accidental elk which wandered there in 1980, probably from the Orava region.