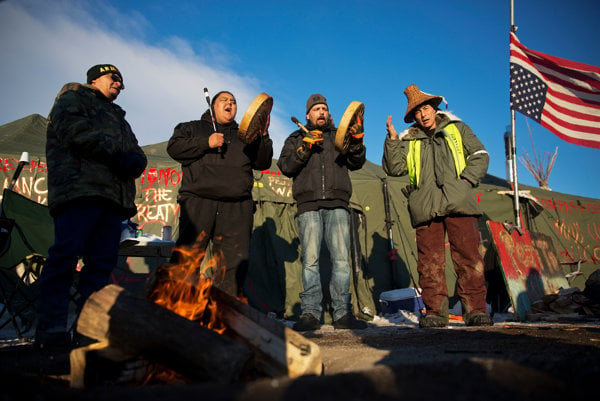 Native Americans drum and sing at the Oceti Sakowin camp where people have gathered to protest the Dakota Access oil pipeline in Cannon Ball on December 4, 2016. (Source: AP/TASR)
Font size:A-|A+

Altogether 24 environmentalists, members of the Slovak Environmentalist Council, have turned to their partners and civic activists in the USA, expressing their concerns as a result of Donald Trump’s victory in the November 2016 presidential race.

They describe him as a person who is, among other things, an enemy of environmental protection who cast doubts on serious environmental threats like global clime change and pollution of underground waters.

“Also his approach towards science, media, human rights and other non-governmental organisations, the bearers of creativity, independence, positive activism and critical thinking, seems to be negative,” the letter reads.

The Slovak activists pointed to the support they have received from their US partners, either as concerns the two world wars in the 20th century, the communist era, the rule of authoritarian prime minister Vladimír Mečiar in 1990s, or the revelation of various scandals, regardless who was in power. They also supported the creation of an independent third sector in Slovakia, according to the letter.

“Now it is our turn to support you at least in this way, verbally, morally and symbolically,” the letter reads.

The activists claimed they understand the developments in the USA since the presidential elections, citing Slovakia’s experience with various regimes and tragic historical events.

“On the other hand, we know your indomitable enthusiasm, determination, inventiveness and activeness,” reads the letter. “Thus we know that you will not give up easily.”

They also called on their US colleagues not to hesitate with asking for help in matters related to environmental protection and civic activism.