EC says commitments by Gazprom would improve trade in Russian gas in Europe. 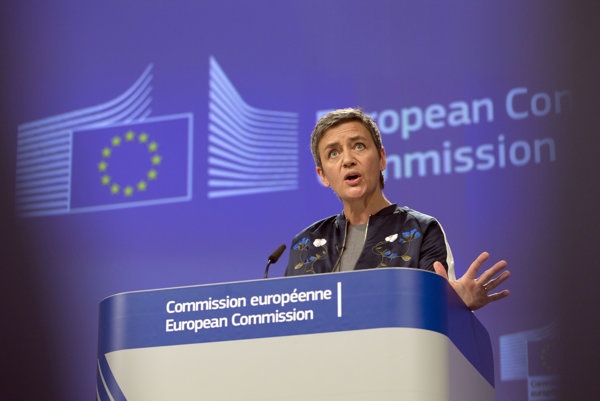 Slovakia has so far taken a reserved approach to news from Brussels about a possible deal to defuse a competition dispute over Russian gas sales to Europe. The draft compromise between Russian natural gas giant Gazprom and the European Commission (EC) would end an antitrust probe by the latter into Gazprom’s alleged abuse of market power, and with it the threat of a major fine.

On March 13, the EC invited comments from all interested parties on commitments submitted by Gazprom to address the EC’s competition concerns regarding gas markets in central and eastern Europe.

“We believe that Gazprom’s commitments will enable the free flow of gas in central and eastern Europe at competitive prices,” said Margrethe Vestager, the European commissioner for competition, as quoted in a press release. “They address our competition concerns and provide a forward looking solution in line with EU rules.”

The deal, and Vestager’s statement, is something of a turnaround; the EC has previously been sternly critical of Gazprom’s market strategies.

The EC’s case, and Gazprom’s market approach, can be illustrated by its effect on Slovakia.

The EC’s main concern is that Gazprom has sought to isolate the Slovak gas market by preventing the free flow of gas across borders. This isolation resulted mainly in an export prohibition that Gazprom included in its gas supply and transport contracts with Slovak customers, the EC wrote in a memo.

The development of gas interconnectors has allowed for reverse gas flows from western Europe to Slovakia. This means that Gazprom’s Slovak customers can access gas from western European liquid petroleum gas facilities, which can supply gas from non-Russian sources, and competitive gas hubs. The emergence of this alternative source of supply has forced Gazprom to adjust its prices by introducing references to hub prices, bringing them back into line with competitive western European prices.

“This is the reason why the EC did not raise concerns of excessive prices in Slovakia,” the memo reads.

The EC believes that Gazprom’s latest commitments would help to better integrate gas markets in the region. They would also allow Slovak purchasers of Russian gas to not only on-sell it, but also to require Gazprom to deliver it directly to the final users (i.e. without it having to pass through Slovakia). This will make a difference in markets to which Slovakia lacks gas interconnectors.

After receiving all comments EU-wide, the EC will take a final view as to whether the commitments are a satisfactory way of addressing its concerns. If members agree, it may then adopt a decision making the commitments legally binding on Gazprom. If the company breaks these commitments, the EC will be able to impose a fine of up to 10 percent of its worldwide turnover, without having to prove an infringement of EU antitrust rules.

The Slovak government has so far been non-committal about the possible deal.

“The ministry will more closely assess the need to comment on the draft commitments of Gazprom within the given period after they are officially published in the Official Journal of the European Union,” Maroš Stano, spokesperson of the Slovak Economy Ministry, told The Slovak Spectator, adding that the ministry welcomes all steps that may contribute to an increase in the energy security of Slovakia.

SPP, the Slovak energy firm that buys gas from Gazprom, will also ponder the possible need to comment on the commitment in the given period, said Ondrej Šebesta, SPP spokesperson.

“In terms of Slovakia, several measures that should be part of the commitments have already been implemented in practice,” said Šebesta, adding that territorial restrictions were removed some time ago. Also, negotiations have led to adjustments to the long-term contract on gas purchase that better reflect the situation on the European gas market, he added.

Energy expert Karel Hirman believes that the solution on which Gazprom and the EC have agreed will balance contract and operating conditions by the Russian gas giant across the EU.

“Gazprom has not wanted to accept, in so-called new member countries, the conditions that it observes in western European countries,” said Hirman. “This was a fundamental problem, because by doing so Gazprom did not acknowledge the EU market as a single market, and respected neither EU legislation nor the position of the European Commission.”

Hirman sees the agreement as a breakthrough that creates a framework for solving other, similar commercial problems in the future, not only for Gazprom but for the whole gas sector and all gas suppliers on the EU market.

Despite recent developments, Gazprom is still a dominant player in the Slovak upstream wholesale gas market, believes the EC. There continue to be barriers to the free flow of gas across Slovak borders due the territorial restrictions included by Gazprom in its gas supply contracts with other central and eastern European customers, and Gazprom could still undermine the possibility for Slovak customers to re-sell gas to other countries.

“In this context, Gazprom’s commitments provide a clear framework to enable the free flow of gas across Slovak borders at competitive prices,” wrote the EC, adding that under the new deal, Slovak customers would be able to both export and import gas to and from other EU gas markets without any restrictions resulting from Gazprom’s supply contracts.

The framework creates opportunities for Slovak customers to re-sell gas to the Baltic states or Bulgaria.

“While the Slovak gas market is connected with some neighbouring gas markets, e.g. Austria or Germany, there is still no gas connecting infrastructure with the Baltic states or Bulgaria,” the EC points out.

Since customers who want to re-sell gas across borders rely on access to gas infrastructure in order to ship the gas, their ability to re-sell gas is currently limited.

“Gazprom’s commitment will enable Slovak customers to request Gazprom to implement a swap-like operation, which would enable its customers to bring gas originally contracted at selected delivery points to Slovakia to be instead brought to the Baltic states or Bulgaria,” reads the memo. “The commitment therefore offers wholesalers the possibility to seek new customers in those isolated gas markets before the gas connecting infrastructure becomes accessible.”

“We now want to hear the views of customers and other stakeholders and will carefully consider them before taking any decision,” said Vestager, the EC commissioner.

They have seven weeks to respond.