Construction works to extend a road close to Bratislava started on April 1, to last for eight months, and limiting the number of lanes available on the highway. 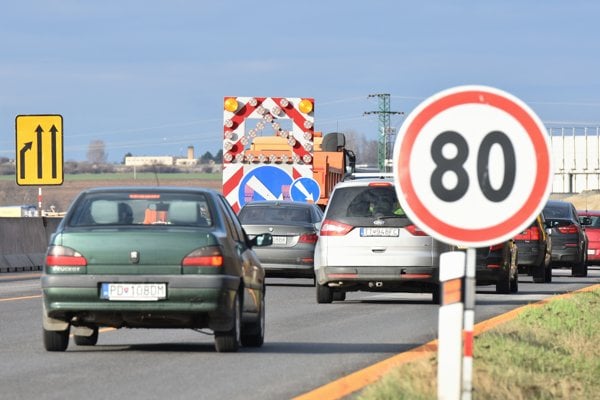 Speed is limited in the D1 highway section near Blatné (Senec area) due to construction works. (Source: TASR)
Font size:A-|A+

Monday, April 3 was the first workday on which construction works slowed down traffic on the section of the D1 cross-country highway between Bratislava and Senec, the Hospodárske Noviny daily wrote on the same day. The construction works around the new crossroad Blatné, near Senec, are expected to last until November. The maximum speed limit has been decreased. The police have already tested the limitations, expecting the delay to amount to five to ten minutes. Other limitations are expected to be applied in September.

The construction of the new crossroad in Blatné is part of the first phase of the extension of the D1 highway stretch between Bratislava and Trnava. The construction will cost €23.3 million and be realised by the consortium of companies Eurovia and Doprastav.

Currently, there are only two lanes in operation at the Blatné crossroad itself, the Sme daily wrote, and traffic is re-directed to just one side of the highway.

There was a traffic jam on the morning of April 3, as announced by the public radio RTVS’ traffic news, Zelená Vlna, with an average wait of twenty minutes. There was no accident in the early morning – when most people commute to the capital – thanks to the police radar gun measuring the speed (limited to 80 kms/hour).