Invalids in the church

The name of the Invalids’ Church / Invalidský kostol in Trnava may be a bit confusing. 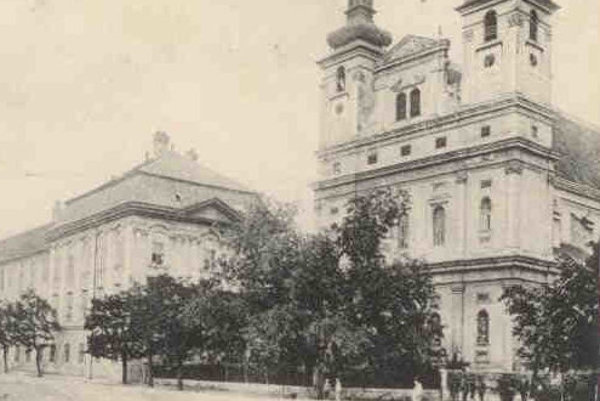 This popular name would rather fit its predecessor, the old Dominican Church which was in such a dilapidated state at the beginning of the 17th century that it could rightly be called an invalid. Jesuits came to the town and demolished the old church. On the same site, they built a new one which we can see in this postcard from 1919.

The Cathedral of St. John the Baptist, which is its official name, started to be build on May 29, 1629, by the Jesuits. The main donator, regional Palatine Miklós Esterházy contracted two Italian masters to do the job, Antonio and Pietro Spazzo. The Italian building school was considered the cream of European building, and thus, the portrait of Pietro Spazzo still hangs in the sacristy of the church.

Apart from the picture of the Italian master, the cathedral also preserved the remains of the noble family Esterházy, who built their family crypt under the gate.

After the Jesuit order was suppressed in 1773, the good times of this church were also a matter of the past. The cathedral, complete with the adjacent university complex, got into the hands of military administration, a bad omen. In 1783, war veterans were moved in here, and thus, the church started to be called the Invalids’ Church. Ultimately, these veterans also went into history when they destroyed, for some mysterious, unknown reason, the sarcophagi of the Esterházys.