No Slovaks appear to be among victims of the metro explosion. 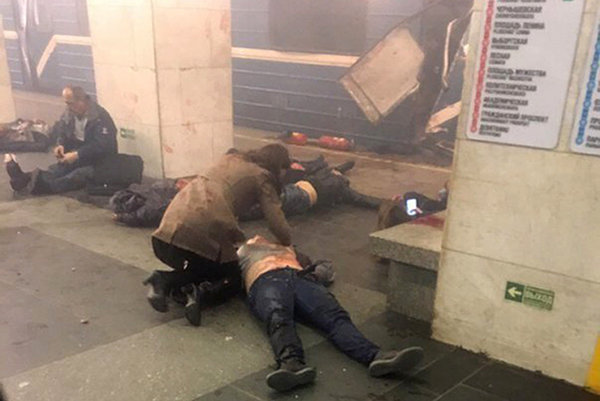 The explosion in a metro car in St. Petersburg. (Source: AP/TASR)
Font size:A-|A+

Slovak President, Andrej Kiska, has sent a letter of condolence to his Russian counterpart Vladimir Putin, concerning the terrorist attack on the metro rail in St. Petersburg on Monday, April 3. The Slovak head of state in his telegram condemned the attack on innocent people.

“Only together, via active international cooperation, is it possible to confront terrorism and its supporters,” Kiska wrote to Putin as cited by the TASR newswire. “On my own behalf and on behalf of the people of the Slovak Republic, I express condolences to you and to the families of the victims, and I wish those injured a rapid recovery.”

Speaker of Parliament Andrej Danko also heard the news about the bomb attack in St. Petersburg with deep sorrow.

“I sincerely sympathise with the families of the victims and I believe that this shameful act will be punished,” said Danko, expressing his deep condolences to all of the survivors, the people of St. Petersburg and representatives of the Russian Federation.

It is believed that 10 people were killed and 50 more were injured in an explosion that took place in a metro car in St. Petersburg earlier on Monday, April 3. Based on information so-far, investigators say that the blast was caused by a homemade explosive device left in an abandoned bag on the metro car.

The Slovak Foreign and European Affairs Ministry has already announced that no Slovaks appear to be among the victims of the explosion. No group has so far claimed responsibility for the attack, which led to a temporary shutdown of the entire metro system in St. Petersburg.