Never leave your drink unattended, you never know how fast it can become the perfect medium for disguising a few drops of love potion. 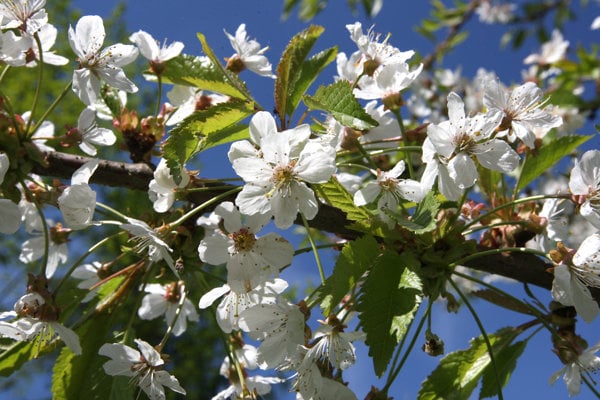 A cherry tree in blossom enchanted everybody with its perfume at the entrance to the Slovak Radio building. (Source: Sme)
Font size:A-|A+

The whole of last week a cherry tree in blossom enchanted everybody with its perfume at the entrance to the Slovak Radio building. For a week it made me start the working day with a smile. Frankly, I stared at it this morning as I felt an internal struggle over what topic to cover as part of my “different Slovakia series”. Aha, love potions (not to be confused with energy drinks or protein cocktails, please). Eliminate the malls on the Danube River’s bank in Bratislava from your mind, switch off the mobile phones and… return to innocence.

In villages, matchmakers – for those born after 2000 it’s a must to clearly define them as real people not computer algorithms – used to have a very important position because girls were (and 98.9 percent of them will always be, forgive me dear feminists) very keen on finding a good husband and they paid close attention to all the customs related to the search, for example, ways of making somebody fall in love with them or stay faithful to them.

“One common practice was to make a small wreath and let it float on the river,” I was told a few years ago by Jela Smidová, a guide at an exhibition on this topic at the Museum of the Slovak Village in Martin.

“If the wreath went smoothly downstream it meant they were going to get married in a locality down the river, if it moved upstream, they were supposed to get married in a place up-river. Another custom is to put willow canes in some manure and depending on which direction they turned they would indicate where a girl was supposed to marry, in the East, West and so on.” Feel free to wonder how many ‘candidates’ have tried to ‘hack’ the system especially if the choice was between Vienna and Gabčíkovo.

Herbs have played a very important role in the economy of fortune telling so it is no wonder that bunches of flowers and herbs were spread all over the table in front of the consultant at the exhibition. There are a total of 9 miraculous herbs in one “recipe”. Girls put this bunch under the pillow and the guy they dreamt of that night was supposed to become their husband. There is one condition, however, the herbs must by picked by Saint George’s Day which is April 24 and it was unclear to me what happened if they dreamt of a… girl. I guess they were quick to blame the quality of the herbs used.

Those who had thatched roofs could pick a handful of straw from the roof and draw the strands one by one giving them three choices: to marry a widower, a young single man or not to marry that year at all. The last straw picked provided an answer. Now, some gender experts might spot a case of discrimination against old single men but you have to bare in mind that the life expectancy of Slovak men has never been too high (and it has remained among the lowest in Europe until today) so if there were some older single men available they might qualify for at least two choices for the roof.

I knew a place that had a thatched roof in Bratislava but by the time I decided to give it a try… it changed owners and gone were my potential husband-forecasting straws.

Of course there is a recipe for how to make your (future) partner stay faithful… but I wouldn’t really try it.

“You take some cubes of sugar and keep them under your armpit for a while then secretly put them in your partner’s tea,” said Smidová.

All in all don’t forget that timeless piece of good advice – never leave your drink unattended. You never know how fast it can become the perfect medium for disguising a few drops of love potion. These are often tinctures made with a wide range of herbs, including rosemary, caraway seeds, lavender, cloves and even strawberries, all bio of course. And in case you did not know it, the banal carrot has a long history as an aphrodisiac.

Anca Dragu is a journalist with Radio Slovakia International, which is available in Bratislava in English on 98.9 FM at 18:30 and 20:30 and at www.rsi.sk. The opinions expressed in this blog are her own.