Even the scandal surrounding underage clients of the resocialisation centre did not prompt the ruling coalition MPs to vote to recall the Labour Minister. 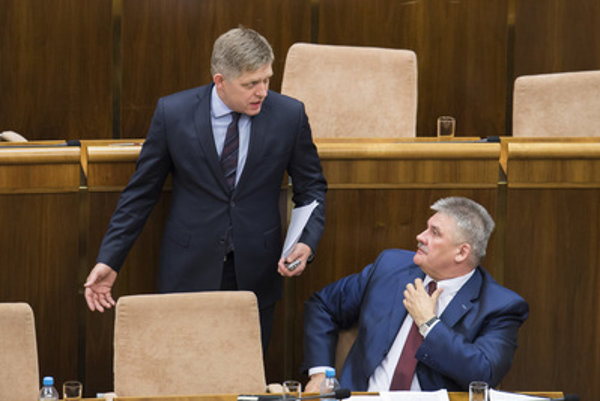 Opposition in Parliament tried to recall Labour Minister Ján Richter due to the scandal surrounding the Čistý Deň resocialisation centre, in which he did not withdraw accreditation from the facility although the accreditation committee recommended him to do so, the Sme daily wrote.

On April 7, only 57 MPs from the 128 ones present voted for his removal, while the ruling coalition supported him, the TASR newswire wrote. All present MPs from the governing parties - Smer, Slovak National Party (SNS) and Most-Hid - unambiguously backed Richter, while only SNS’ Jaroslav Paška abstained from the vote. Richter’s ousting was supported in the ballot by MPs from Freedom and Solidarity (SaS), OĽaNO-NOVA, Sme Rodina (We Are Family), Kotleba-ĽSNS and most independent MPs. OĽaNO’s Richard Vašečka did not vote.

The previous parliamentary discussions on his removal lasted for more than 16 hours, starting on April 6 afternoon.

Richter, according to the opposition parties, is covering the scandal. In Čistý Deň (meaning Clean Day), clients – including underage ones – have allegedly been abused and tortured, opposition SaS MP and caucus leader Natália Blahová reported last year, according to Sme.

The session was initiated by opposition lawmakers, who cited the resocialisation centre scandal as the reason why the minister should be dismissed. SaS and OĽaNO-NOVA officially submitted a petition to that effect signed by over 50 MPs last week.

“The Labour Ministry and the Labour, Social Affairs and the Family Centre are holding a protecting hand over the mistreatment and abuse of children, a situation that cannot be allowed by any democratic country and people,” Blahová said on April 4 after submitting the motion, adding that staff who have dared to voice criticism concerning the situation at the ministry have been intimidated with the threat of dismissal. She stated that Čistý Deň has not been stripped of its licence despite gross violations of the law, while some other facilities have lost their licences for small transgressions.

Cabinet is "disgusted" with the opposition activities

Earlier this week, Richter expressed his “disgust” with the opposition’s activities concerning the facility.

At the parliamentary session on April 6, Blahová also read out the testimonies of children placed there and their parents, who decried the bullying and violence perpetrated on children at the centre.

Later, Prime Minister Robert Fico in parliament backed his minister, describing the opposition’s initiative as absurd and stressing that the they failed to table a single relevant argument for Richter’s removal, and slammed also the session’s opening speech by Blahová as “nothing but old wives’ tales”.