Hungarians beat Slovaks and even Kenyan in the Devín-Bratislava run

The jubilee 70th year of the National Run Devín-Bratislava ended with a surprising triumph of Hungarian runners. 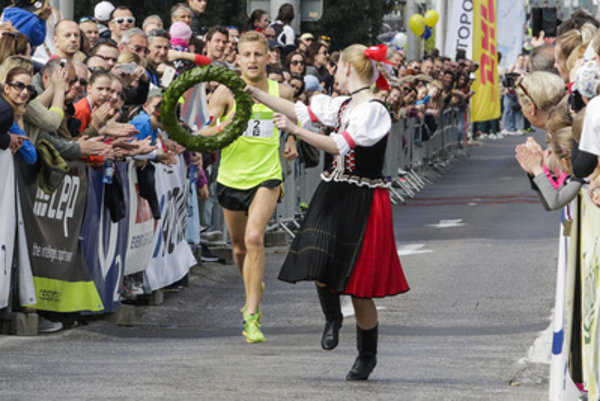 On April 9, in the men’s main category, László Gregor won with a time of 35:48 minutes, while in the female category, Zita Kácserová (40:28 minutes) defended her last year’s victory. Among men competing to the 11.625 kilometre track, Gregor, too, was the winner. He is a 10-time Hungarian champion in several disciplines (3 times in cross, 2 times in road run 10 km, 2 times 10,000 m and 1 time 5,000 m outdoor and 2 times 3,000 m indoor). Gregor beat the Kenyan favourite, who has a hat-trick from three other editions and who holds the event’s record, Joel Mwangi, the SITA newswire wrote. The Kenyan from Nairobi, aged 31, who is also Gregor’s colleague from the Benedek team, had a crisis about halfway, and he only trotted to the finishing line in the Bratislava harbour.

“I am very happy about the victory,” Gregor said, as cited by SITA, “and I believe that I can manage this also next year. Devín is a nice run on a beautiful track along the Danube. This year, I would like to win the Hunagrian champion 10,000 m title, and succeed in the 2nd league of European Championship of teams in Tel Aviv in the 3,000 metres hurdles at the end of June.”

The best Slovak was triathlon specialist Matúš Verbovský (ŠK Atléti BS Banská Štiavnica) with a time of 37:17 minutes. "I am happy to be the best Slovak at this splendid run event,” he told SITA. “I am primarily a triathlete, and I am very glad that I can present my athletes form also amongrunners,” said the runner, aged 18, who recently changed to the AtlétiBS Banská Štiavnica sports club and coach Róbert Petro.

Zita Kácserová – the Hungarian runner aged 28, who won for the third time out of five starts in this run – was followed by four Slovak runners, best of whom was Nikola Čorbová (KAMI PROFIT). "I am happy to have won; I like to return here,“ Kácserová said. “The hardest of my three victories was last year- as it was cold and I do not like that.”