Is a career as an artist utopian?

Young artists say it is possible but hard to make a living via the arts in Slovakia. 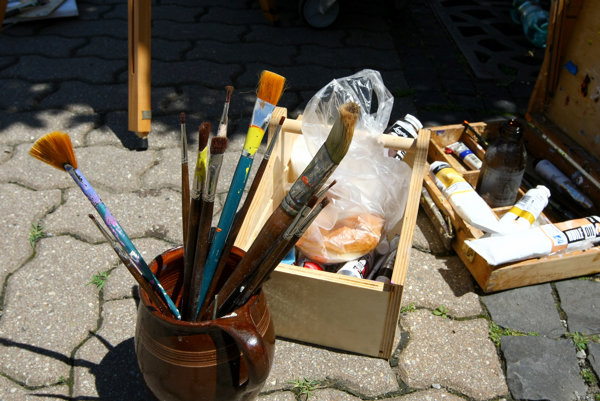 Many children dance, sing, play musical instruments, or paint as a hobby. Some of them keep the hobby up even after they have grown, but very few decide to make their living by the arts.

Making a living as an artist is not an easy thing in Slovakia, people from various areas of the arts confirm. Many of them have tried to find better conditions for their work abroad.

“Culture in Slovakia is still undervalued because we as Slovak people do not value it,” bass baritone Tomáš Šelc told The Slovak Spectator.

Young actor Pavol Seriš lives and works in the Czech Republic and confirms that he gets more opportunities to perform there than back home in Slovakia. There are more theatres, independent stages, and festivals. Czechs simply have a closer relationship to the theatre, even the chain of amateur theatres is bigger than in Slovakia, he said.

“Slovaks usually go to the plays of theatres or actors they know,” Seriš explained, adding that even in a Czech village people will come to his performance, whether he or the play is known or unknown.

In general, theatre actors in Slovakia do not earn much, which is why they often look for other opportunities to make their living, such as TV series or advertisements, Seriš added.

“When I began as an amateur, I didn’t imagine that one day I will earn enough to make my living by theatre acting,” said Seriš. Seriš liked to create plays and perform when he was a child but was not planning to become an actor. He chose to study English and Norwegian, and it was during his studies when the ambition to become an actor appeared.

“At first, I was performing theatre and stand-up comedies while studying,” Seriš explained. In 2010 he was accepted to the Janáček Academy of Music and Performing Arts in Brno and theatre absorbed him completely, he added.

Today, he mostly writes his own plays and perform them in Slovakia and the Czech Republic, although he has been awarded at various foreign international festivals in Italy, Estonia or Morocco.

Opportunities exist at home too

On the other hand, Tomáš Šelc believes that young Slovak musicians have a wide scale of opportunities in Slovakia.

“Many high-quality projects and festivals funded from funds supporting Slovak culture and art are dedicated to classical music,” Šelc told The Slovak Spectator. There are also many philharmonic orchestras and opera houses in Slovakia, mostly funded by the state, he added.

Šelc studied opera singing and choir conducting. He belongs among those artists who are successful in their arts career in Slovakia, giving concerts abroad and teaching at a music school.

It is possible to make a breakthrough with classical music in Slovakia, Šelc says, but admits that it is hard.

“The European Union and open borders enable the movement of excellent artists,” he said, explaining why is hard to get the name of a beginning musician well known. The competition of solo singers is also big, as art schools produce new graduates every year.

Slovaks usually do not appreciate culture and they are not proud enough as a nation, Šelc said.

“Partly, it’s because we do not know all of our artists, who cultivated culture in the past,” said Šelc. Seriš agreed, pointing out that Czechs know of and are proud of ‘home’ music composers as Smetana or Dvořák.

When a nation knows its cultural history, it will give it more space in its everyday life, Šelc concluded.

Painter Tomáš Žemla thinks that Slovaks are lost in contemporary culture. He thinks that there are two sides of Slovak fine arts – the one which tries to be contemporary and the second one consists of shallow but likeable art.

“At least, the common customer will buy a poster from Ikea,” he said. People who are willing to pay for visual arts are usually collectors, Žemla shared his experience.

Žemla is an artist as well as an arts teacher. He admits that there are years when he earns more as an artist but when he spends a year or two preparing an exhibition, his teacher’s salary is very helpful.

“An artist has to sacrifice a lot to make a living with the arts,” he thinks, adding that as soon as the artist also has to maintain a family, it’s a utopia.

All the artists that The Slovak Spectator spoke with agree on one thing – to become a successful artist and produce quality art is a long-term process which requires much patience and may last decades.