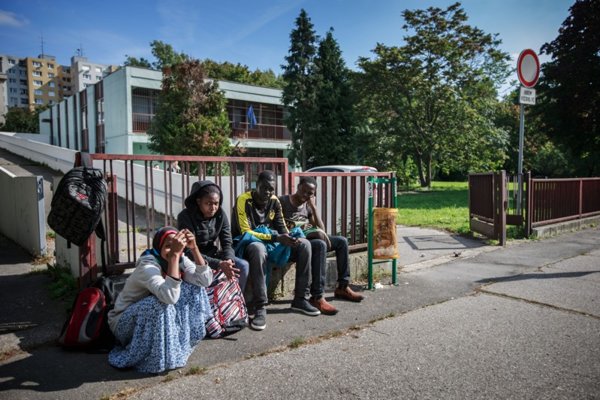 I debated whether I should stay up all night to get to the office at an early enough hour, spent some time making calculations as to when I would be able to get there, and ultimately made the mistake of finally going to sleep at 1:30 a.m., setting the alarm for 3:00 a.m. I somehow got up, took a shower, and went to the bus stop under Most SNP, where I took a bus at 4:25 to a stop in Petržalka. Because of the construction at the Slovak National Gallery, this was not the bus I had taken in 2015 and so got off at an unfamiliar location. I got a little lost but found the office by 4:45.

As in 2015, there was one spotlight shining, casting everything in an ominous light, but I recognized at least one of the unofficial organizers hanging out by the door and asked about the list. They told me I had to find the last person who arrived before me, which I was able to do rather quickly. As expected, there was no room on the three benches. About half the people there were sleeping, huddled in blankets, and I counted approximately 20 in total, which I took as a possible hopeful sign that I would actually get to see an officer. Four or five of those were among the unofficial organizers, though perhaps more as there were a few women on one bench who looked vaguely familiar. It’s always hard to tell in the pitch black. I tried to mentally prepare myself for the wait with nothing to do. Many people were playing on their phones, but I wanted to conserve my battery because I knew I would need to call my friend at some point.

I paced the grounds, but didn’t want to get too far away while I knew that I was the last person to arrive. Within a short time, a young man in his twenties arrived and found me, then wandered off. Some time after that, a man about my age asked me if I was last and I told him that someone else was after me, but he couldn’t be found at the moment. Eventually the young man returned and it was all sorted. Now I felt like I could relax about my place in line, at least if the person whom I was behind didn’t move because I couldn’t see his face under his hood thanks to the lighting. I paced. I chewed too much nicotine gum. I checked Facebook more frequently than I should have for saving the battery. I checked the time whenever it seemed like about 30 minutes had passed, and it was almost always closer to 15.

Around 6:00 a.m., the unofficial organizers began organizing us. This is about half an hour earlier than in 2015, when the list was in effect, and is perhaps an effect of its loss. After some jostling and confusion, which there always is, even with the list, we were organized into a line that ran the length of the small semi-enclosed area then curled around back to the side near the door. When I did this before, the line would often extend out of the semi-enclosed area entirely, so this is at least fewer people than I feared. I was now far from being the twentieth person in line, but this was to be expected. My experience in 2015 was that some people, usually seemingly paid representatives for those who can’t take the time or don’t want to wait the whole time themselves, were given places near the front of the line. I found myself at the far end of the semi-enclosed area, about halfway through the line. If memory serves, I was able to see an officer when I had been at about this point before, though that was one of the times the officer discovered something he or she didn’t like about my application and sent me away without accepting it so that I could find some other documentation. As a result, I was relatively hopeful about my chances. I texted my friend that perhaps she should come at 7:30 a.m. since I thought there was a chance I could get in during the morning hours. Meanwhile, a few people around me who had been there since about 5:00 a.m. asked why they were being pushed to the back of the line. As it turns out, they did not know to find the last person. One of the people near me in the line explained the situation to them, and I thought a fight was going to break out for a second, but everyone calmed down, knowing this is the closest to an orderly system that can be expected under the circumstances.

While we waited for the door to open, I took out my paperwork and filled out portions of the application form. I asked the people near me a question about the renewal process. I complained about the situation on Facebook. I eavesdropped on the conversations in English. One of the people holding a place in line for someone told his client that he was a law student. Because he stayed there for longer than the other placeholders usually do, I wondered if he would be helping her with the officers, but I lost track of them over the passing time. Just before the door opened, my friend arrived, so I now had some company. We chatted for a while. It took me about 15 or 20 minutes to actually get to the front of the door because the officer at the door checks your passport and asks what service you need. In 2015, one of the unofficial organizers was usually there with him to help keep everything straight and explain the situation to latecomers, but now it was only the officer, who of course had not been there earlier. I got my ticket: 334.

The way the ticket system works is that there are four sets of three-digit numbers that start with 3, 6, 0, or 8. The 6s are for those collecting their permits, and so tend to move quickly. I believe the 0s are for general inquiries but I don’t at all know what for what service one may be assigned an 8. The 3s are for those trying to submit their paperwork to apply for the permit or its renewal. There are two doors through which you enter to speak with officers, each with small screens that display three numbers at a time. Every once in a while, a doorbell sounds and the numbers change. The 3s began with 301. I became less hopeful, but it wasn’t outside the realm of possibility that I would get to see an officer.