Blog: A line does not always form 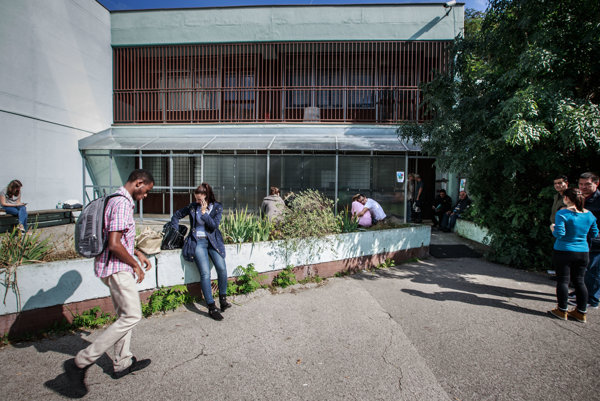 I again did not wake up with the alarm, but half an hour later. I got a shower, put on clothes that would be acceptable for teaching if I got extremely lucky, and began walking in the pleasant, if crisp, weather. I also made sure to wear a winter coat this time, having learned my lesson on Friday. This time, the lights in the foyer were on when I arrived. Arriving at 3:50 a.m., I appeared to be about the sixteenth person, including the organizers and placeholders, behind two women. Within five minutes, a young couple arrived and was behind me, then the law student from Friday soon after them. I was early enough that the benches were empty, the earlier arrivals sitting on the concrete wrapped in blankets in pairs and small groups under the semi-enclosure. I was unsure what to do with myself. I’d brought work with me, but it was too dark to do anything. I was hesitant to use the flashlight on my phone, partly because of the battery but also because holding the phone in one hand and trying to read loose papers in the other seemed awkward. I decided to sit on the bench and try to sleep. After about ten minutes of being stirred by every movement and sound, I decided my phone battery could withstand tuning into to an internet radio station for a little while and put in my earphones. While the darkness broken up by only a spotlight and, this time, the light coming from the foyer’s windows lends an ominous atmosphere to the scene, it is safe. Nonetheless, I needed to distract myself enough to fall asleep, if only for a little while.

I slept for about twenty minutes, maybe thirty. When I awoke at about 4:45, I got up and paced on the patio for a little while, then checked my Facebook feed once or twice, paced again, and sat back on the bench, trying to fall asleep again. That didn’t work, so I turned off the radio on the premise of saving the battery, and paced again. I considered going to the bathroom against a tree in the darker shadows, as I’d thought I’d seen someone else do, since it was still well over two hours before the office door opened and the twilight would start soon enough, but decided against it. Paced a little more, and finally decided to sit back down on the bench and listened to the radio. When the battery dipped below 75 percent, I turned it off and sat in the quiet.

Again around 6:00, someone made an announcement to get ourselves organized, so I walked into the semi-enclosed area through one of its three empty frames at the far end from the door. I found the two women whom I was behind and the young couple and law student found me. The two women did not speak English terribly well, nor Slovak at all, so I decided not to bother asking them whom they were behind and put my earphones back in. This time, whoever was nominally in charge of organizing things was not as adamant about the line and the crowd became a vague zigzag. However, this was not immediately obvious and it seemed as though we were going to just jam our way toward the door in an hour. Again I was well back of where it seemed I might have been when I arrived. The man in the young couple spoke Slovak and, after discovering one of the placeholders was immediately before the two women in front of me, asked him who was in front of him. Another two placeholders, then it became unclear, either because he didn’t know or because he couldn’t find the right person in the crowd.

The placeholders will often move in and out of the line, coordinating with each other to save their spots, but no one else does this. In addition, people who arrive later who are unaware of the system will often walk through the semi-enclosed area, I assume because they are unaware of the open frames. Since we were arranged in a crowded zigzag this time, all this moving and jostling moved me away from the two women and young couple, though the couple eventually helped me work my way back into place. This meant that I was now smack in the middle of the crowd, jammed in from all sides.